Researchers from the University of Siegen are involved building a unique digital lion warning system in Botswana. It should avoid conflicts between the local population and lions and thus contribute to the protection of the predatory animals.

Some 1,200 lions still live in the Okavango Delta in Botswana, up to 70 of them on the northern border of the World Natural Heritage. But the animals are repeatedly shot or poisoned by residents. In most cases, the reason are attacks by the predators on the livestock of the local population. In the last one and a half years alone, more than a hundred cases have been recorded in which lions have torn free-roaming cattle. Scientists from the University of Siegen want to mitigate the conflict with modern technology: They are working on a worldwide unique early warning system that alerts the inhabitants when lions are too close to them or their cattle. The scientists cooperate with the predator researchers of the conservation and research project "CLAWS Conservancy".

"Such an IT development on the basis of ethnographic research in Africa is completely new territory for us. It is great to contribute to the protection of lions with our knowledge in the Okavango Delta, "says Dr. Helmut Hauptmeier from the "iSchool" (School of Media and Information) at the University of Siegen. The media scientist returned from a one-week stay in the delta in February together with his colleague Konstantin Aal from the Chair for Business Information Systems and New Media. The cattle are important status symbols for the people there - but conventional methods of cattle conservation such as the keeping of animals are hardly practiced, the researchers report. "During the day the cattle herds, which can be huge at times, move almost uncontrolled through the delta. To protect them from lions' attacks, the team from Siegen would like to develop a dynamic "Geofence" - a virtual fence. If the lions get too close to this fence, the cattle keepers are automatically alerted and can bring their animals to safety. "It is about restoring the balance between people and lions and enabling a peaceful co-existence," explains Aal.

In recent months, biologists of "CLAWS Conservancy" have already equipped some lion packs with GPS transmitters. To do this, an animal of the pack is anesthetized and gets a collar with an integrated GPS transmitter. "It's safe for the animals," Hauptmeier assures. "The GPS collars do not bother them. Every two hours they send a signal via satellite, which discloses the whereabouts of the lions. If the transmitter's battery is empty after about three years, the collar will fall off by itself."

In the coming months more lions, as well as the lead cows of the large cattle herds, are to be equipped with GPS-transmitters. "Based on the data, we can see where the animals are moving and can determine a critical line along which encounters are probable. This geofence is dynamic and automatically adapts to the movements of the animals, "explains Hauptmeier. In addition, the scientists want to draw a static fence around the villages. If the lions are too close to these virtual boundaries, an alarm should be sent directly to the inhabitants or the cattle keepers via SMS.

Biologists of the "CLAWS Conservancy" are already observing today, where lions move in the delta and warn the population if necessary. However, this only works through a cumbersome telephone chain and takes a lot of time, as the Siegen research team has observed. "Our system should be flexible, fast and direct," say Aal and Hauptmeier. "In order to achieve this, we must develop a technique that is really usable for the local people." In interviews and workshops, the scientists want to find out what technical knowledge the inhabitants of the delta have and how they deal with technology in their day-to-day lives. A first prototype of the new warning system will already be available in July. "We want to develop this further, together with the future users, and adapt the system to their needs," explains Aal.

By the end of the year, the technically advanced Lion warning system is planned be ready for use.

It could also be transferred to other situations and areas with relatively little effort. For this purpose, the scientists at CLAWS Conservancy have already developed some ideas, together with their colleagues from Siegen. For example, the technology could contribute to the protection of the snow leopards in Kazakhstan or the wolves in and around the American Yellowstone national park, or it could help implement the unique rehabilitation and release project of the European bison in the German Rothaargebirge. 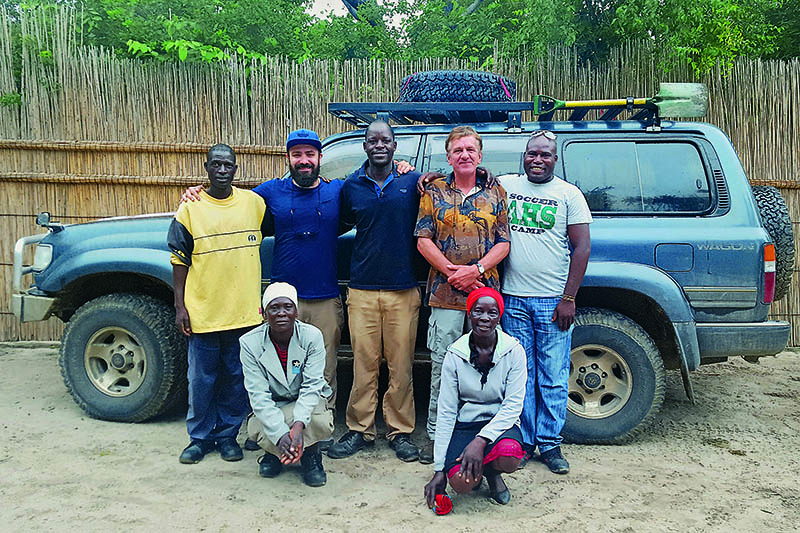 Farewell photo with local helpers in the project: Konstantin Aal (2nd from left) and Dr. Helmut Hauptmeier (2. f.r.) from the University of Siegen have just returned from a three-week research stay in the Okavango Delta.