Looking Through the Cosmic Fog

Siegen researchers participate in the Pierre Auger Observatory in Argentina. It is the largest cosmic ray observatory ever built. There, it has been proven that this kind of radiation comes from outside of our galaxy.

"It's like we've been standing in thick fog for 50 years - and now the fog is starting to clear for the first time," says Prof. Dr. Markus Risse from the University of Siegen. He is one of the scientists involved in the Pierre Auger Observatory. The researchers investigate cosmic radiation, which has a very high energy level, as Risse explains: "The energy of the particles is sometimes over a million times higher than the energy that we can achieve with the accelerator at CERN. These are world record energies. "So far, it was unclear where this cosmic radiation comes from - our own galaxy, the Milky Way, or from further out. "We can now almost certainly say that the radiation comes from more distant regions of the universe," says Risse. From where exactly, the scientists want to find out in the future.

Research on this high-energy radiation is very expensive. Prof. Risse explains why: "The higher the energy of the particles, the more rarely they come to earth. Therefore, we can no longer measure them directly, but only indirectly. "If one of these particles penetrates into our atmosphere, it collides with others and new particles are created. These in turn collide with others and again and again, so that turns into a whole particle shower. "This principally flies like a pancake at the speed of light towards the ground", compares Prof. Dr. med. Markus cracks. A shower covers several square kilometers and you need a large area of free space for the measurement.

Since 2001, this area in Argentina has been under development. By and by, 1,600 water tanks have been built there, covering a total of 3,000 square kilometers, which is larger than the Saarland region. With the tanks, the particles can be made visible, because moving through water, they send out the so-called Cherenkov light. "That's because in the water particles are faster than light," explains Prof. Risse, "which is a phenomenon roughly comparable to the bang that occurs in supersonic flight."

Risse is a professor in the physics department at the University of Siegen. Together with his colleague Prof. Dr. Peter Buchholz and nearly 20 employees, he is involved in the Pierre-Auger collaboration. In total, around 400 scientists from 18 countries are studying cosmic radiation. From Siegen, for example, contributions to the electronics are made, which ensures that the measured data from the water tanks are processed and forwarded. In addition, the scientists from Siegen are involved in interpreting the results, explains Risse: "What interests us most is which types of particles are in the radiation: there are, for example, hydrogen nuclei and iron cores". The interpretation can also be assisted by computer simulations that predict the air showers and then compare them to the actual measurement results.

The current collaboration results, published in the journal “Science”, are a contribution to the study and understanding of the universe. High-energy cosmic rays have been known for around 50 years, but the exact source is still uncertain. Therefore, particles with even higher energies should now be measured accurately to find out more about them. "By 2020, the water tanks in Argentina will be equipped with new devices that will allow better measurement," says Prof. Dr. Markus Risse, "In any case, we will continue to measure until 2025." At best, the researchers will find out exactly where the particles come from and how nature succeeds in sending them through the universe with so much energy. 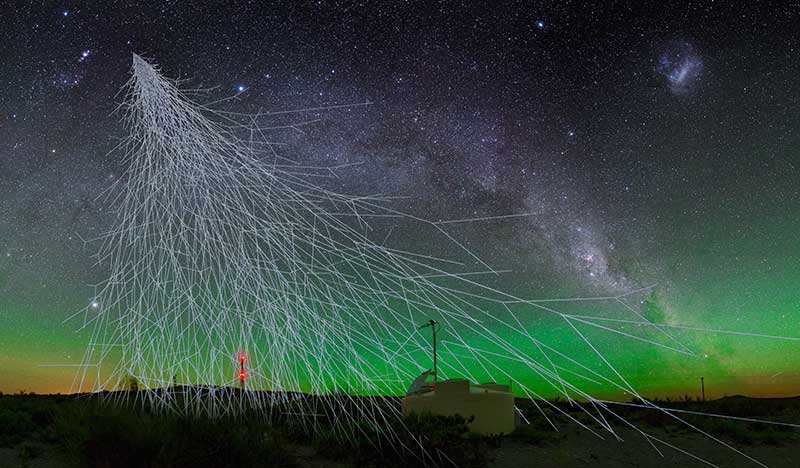 Artistic representation of an air shower coming down over a water Cherenkov detector of the Pierre Auger Observatory.