Prof. Dr. Carsten Busse is new to the Department of Physics at the University of Siegen and is involved in experimental nanophysics, especially ultra-thin textured films. These could be used in the future, for example for computer chips or touchscreens.

The biggest scientific breakthroughs in his career have been surprises, says Prof. Dr. med. Carsten Busse. His decision for the University of Siegen was not. Busse is originally from Olpe and has lived there for twelve years, together with his wife and now three children. In the past he has commuted to the universities in Cologne, Bochum, and finally Münster. "My applying here certainly had something to do with my love for the region," he says, "but it was a good offer as well, the position is very attractive." Since August 30, 2017, Carsten Busse has been a professor in the Department of Physics, School of Science and Technology at the University of Siegen. He deals with experimental nanophysics, specifically with ultra-thin layers. These include, for example, graphene, a form of carbon whose structure looks like honeycombs.

"Graphene is as thin as you can imagine, because it only has the thickness of an atom," explains Busse. "I will research fundamental questions, such as how to produce this particular material in the highest quality possible." It is not yet clear which areas these ultra-thin layers can be applied to in the future, but that is nothing new for the scientist: "There is hardly any novel material for which the application was already clear beforehand. We have many options for everything that needs to be small - circuits and computer chips, for example. "Graphene could also contribute to the further development of touchscreens, as Prof. Busse explains:" Graphene combines two important properties: It is an electrical conductor and it is transparent. This is very important for displays with touch function, which are currently made of ceramic material. Graphene would be much cheaper - and even flexible."

That sounds promising, but the road that leads there is still filled with uncertainties. "It is possible for material properties to change completely," said Busse. "When electricity flows, for example, the electrons need space to expand. With such a thin layer, they may behave quite differently." He hopes to be able to conduct surface research on three vacuum devices in a year's time. "The best vacuum ever in the Siegerland," says the physicist, laughing. The pressure in the machines is lower than in space. At the moment, Emmy Noether campus is still being rebuilt so that new laboratories can be set up. "We need very good vibration damping, but an older, massive building is often particularly well suited for this," explains Prof. Busse.

Busse studied in Bonn after completing high school in Olpe. During his studies he also completed a semester abroad in Edinburgh. After receiving his doctorate in Aachen, he worked at the University of Aarhus in Denmark. This was followed by stations in Cologne and Bochum, most recently he was employed at the Institute of Materials Physics of the Westfälische Wilhelms-Universität Münster. 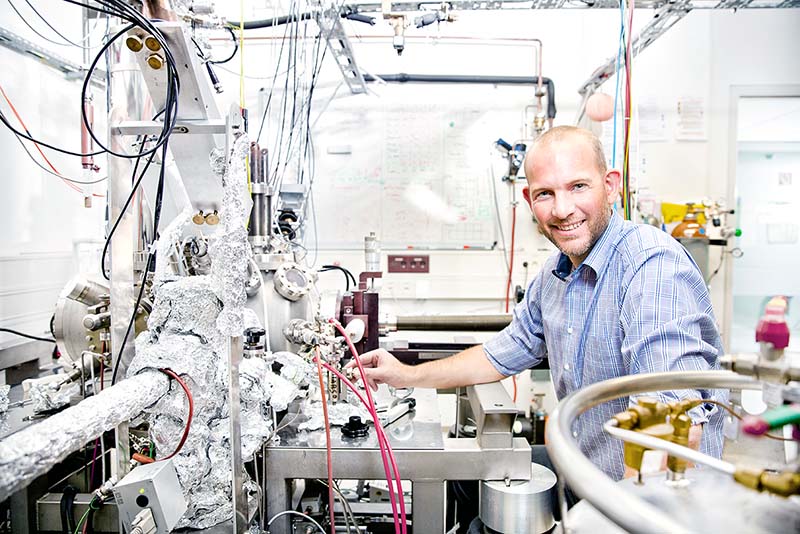