“Brought Out the Best”

The Campus Unteres Schloss of the University of Siegen will get a new cafeteria. Construction will begin in spring 2018. The new building will be built in the street "Am Obergraben".

It all began with the former Kreisklinikum, next came the historic Unteres Schloss - and in a few months, the campus Unteres Schloss of the University of Siegen in the city center is enlarged by a new cafeteria. University, city, Studierendenwerk and the company "Immobilienprojekte Siegerland" (IPS) now presented the plans for the new construction of the cafeteria building in the street “Obergraben". The work will start in the spring of 2018, with a planned construction period between 21 and 24 months, so the goal is to complete in the winter of 2019. The university invests a total of around 18 million euros into this project.

"It was a real challenge to design such a building in the middle of the city. The best possible result was achieved. For that, I cordially thank all those involved. This is a very important building block for our campus in the city center," said University Chancellor Ulf Richter. "We want the students to feel comfortable here.” The new cafeteria is an important intermediate step on the path of urban development, a core element of the project 'Uni in die Stadt'. “The university is already providing a lot of positive impulses for the city - this will be even more pronounced," said Mayor Steffen Mues.

The result will be a modern building operated by the Studierendenwerk Siegen. The canteen, the cafeteria, a bistro as well as storage, production rooms, lounges and dressing rooms are located on four floors. The building has two entrances. On the one side over the street "Obergraben", on the other side on the level of the former Kreisklinikum. "Our goal was to design a compact building, everything should be easily accessible on foot. This cafeteria is created right at the juncture between the Lower Town and Upper Town. The location is ideal," said city architect Henrik Schumann.

The new building offers a total of 650 seats, and the cafeteria can produce 2,700 meals per day. The subsidized prices are equal to the prices in the other facilities of the Studierendenwerk. A total of 30 positions for up to 50 employees will be created. "The cafeteria, acting as a crowd magnet, will attract young people who stay in the city and those who pour into the city. We are excited about this high-tech building, which will survive for the next 30, 40 or 50 years, "said Detlef Rujanski, Managing Director of the Studierendenwerk.

For people with disabilities, an elevator will be installed, which runs from the street "Obergraben" to the former Kreisklinikum and the cafeteria upstairs. It can be used during opening hours, improving the accessibility of the entire campus Unteres Schloss. "The new cafeteria building connects the upper city with the lower city, functioning as a hinge, we can take down barriers this way," said Ulf Richter.

For the construction phase, the street "Obergraben" will remain completely closed. The parking garage of the department store Karstadt will continue to be accessible. It is also planned to continue to provide a passage for pedestrians. Bus lines, which so far drive over the street "Obergraben", are diverted and use the Löhrtor and the Löhrstraße. Once the final formal hurdles have been taken, the construction project can start, explained Andreas Moll and Marc Christoph of "Immobilienprojekte Siegerland". The company carries out the construction project as the building contractor. 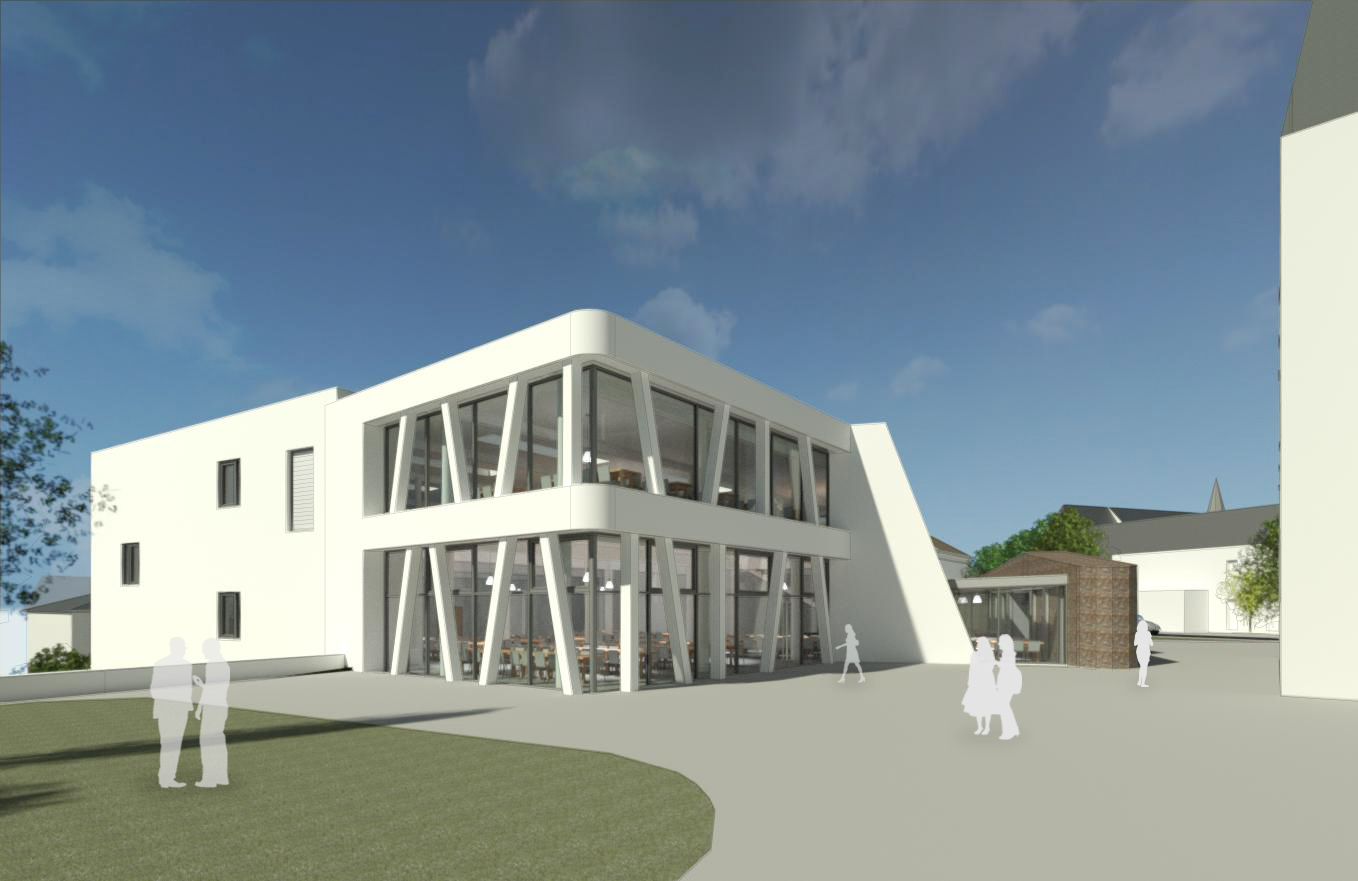 On the level of the former Kreisklinikum (now the Ludwig-Wittgenstein-Haus), ground-level access to the new building is possible. You will find the cafeteria on this level, and at the top the dining hall.