People rise from their seats. Applause roars through the Audimax. For minutes. A special gesture for a special guest. Prof. Dr. Joachim Frank, winner of the Nobel Prize for chemistry in 2017 and a native of Siegen, will receive an honorary doctorate from the University of Siegen. It is one of the highlights of the traditional annual reception, to which Rector Prof. Dr. Ing. Holger Burckhart has invited. The more than 500 guests from science, business, politics, culture and society not only get to know the Nobel laureate, but also experience the keynote speaker as North Rhine-Westphalian Prime Minister Armin Laschet. And then there are four outstanding students who are honored for their achievements. "Respect and Recognition" are therefore the keywords with which Rector Burckhart in conversation with moderator Armin Himmelrath outlines the evening right at the beginning. That the university is capable of performing interdisciplinary research at an international level is due to great individual commitment, but also to all scientists, the staff of the administration and the students. Projects such as "rethinking medicine", but also the structural renewal and expansion show: "The University of Siegen is respected, and what is recognized, is also promoted," said Burckhart. 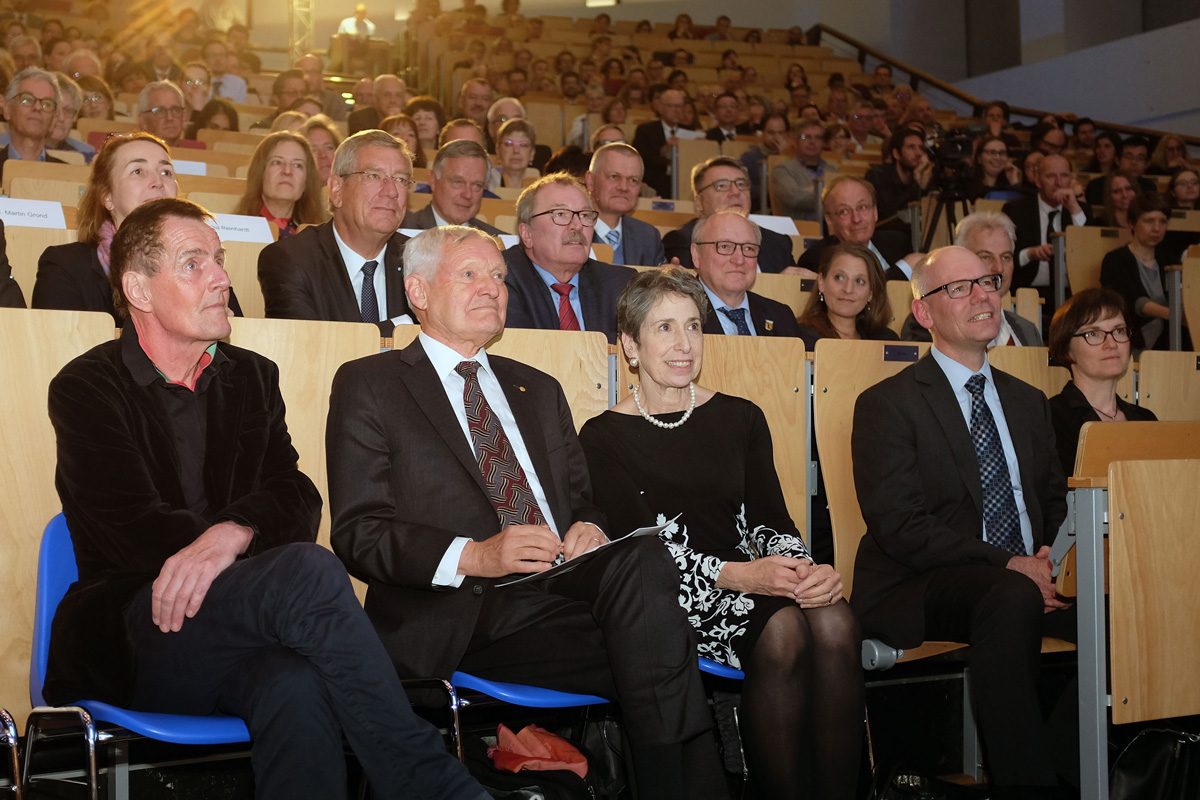 Back to the keywords "Respect and Recognition", it was up to Prof. Dr. Holger Schönherr, Dean of the School of Science and Technology, to give the eulogy for Joachim Frank. The findings of Frank's research are revolutionary. The biophysicist received the Nobel Prize in Chemistry together with two other scientists for the development of so-called cryo-electron microscopy. A method in which molecules can be "frozen" and reconstructed by means of imaging techniques in a 3D structure. "This makes it possible to detect structural changes in a cell," explained Schönherr. The research concerns chemistry, physics and biology. "What I summarize so casually here is a life's work," emphasized the Siegen chemistry professor. "Granting an honorary doctorate to Joachim Frank is also an honor for our university."

Frank, who traveled to Siegen with his wife Carol from New York for a few days, thanked him with a charismatic speech peppered with little memories of his childhood and school days. He told how he made his first little experiments in the "hut" in his parents' garden. Of his physics teacher, who was called "beautiful Willi" and who influenced him. And of the rubble of the post-war period, which may also be responsible for his interest in science. "Because I was looking for meaning in this chaotic world." Frank, who went to the United States after studying in Freiburg and finishing his doctorate in Munich in 1970, was touched by their visit to Siegen. "It means a lot to be honored by the university of my hometown."

The certificate of honorary doctorate was presented to Frank by NRW Prime Minister Armin Laschet. He had previously praised the region as economically strong in his speech on "Perspective(s) Südwestfalen". The problem areas in North Rhine-Westphalia would be elsewhere. " South Westphalia at most sends the signal do Düsseldorf (state capital - translator’s note): do not interfere with too much regulation," said Laschet with a wink in his eye. But of course infrastructure issues were important in a well-established region. These included roads, education and health care. With the model project "rethinking medicine" one hopes, among other things, to be able to meet the shortage of doctors in rural areas. "If medical students in the future can gather their practical experience here, they may want to commit themselves to the region." If all those who wanted to pursue a career aspired to the cities, that could not be good either in the cities or in the countryside. The University of Siegen stands for innovation. "It can also promote social developments," says Laschet.

Traditionally, at the annual reception, students are awarded for outstanding achievements. The Dirlmeier Foundation's awards went to Dr. Johannes Paßmann for his work on "The Social Logic of Likes: A Twitter Ethnography", and to Markus Suta, who has a PhD thesis on "Luminescence properties of divalent lanthanides and excitons in the halidoperovskites CsMX3 (M = Mg, Ca, Sr; X = Cl, Br, I) - Mechanistic insights into novel promising scintillators".

The prize of the University of Siegen for junior research scientists was awarded to Dr.-Ing. Miguel Heredia Conde for his thesis "Compressive Sensing for the Photonic Mixer Device". Talish Babayev was honored with the German Academic Exchange Service (DAAD) Award for outstanding academic achievements and remarkable intercultural engagement. Prof. Dr. Peter Haring Bolívar, Prorector for Research and Junior Scientific Staff, congratulated the winners and emphasized: "What brings us forward is the work of young talents." 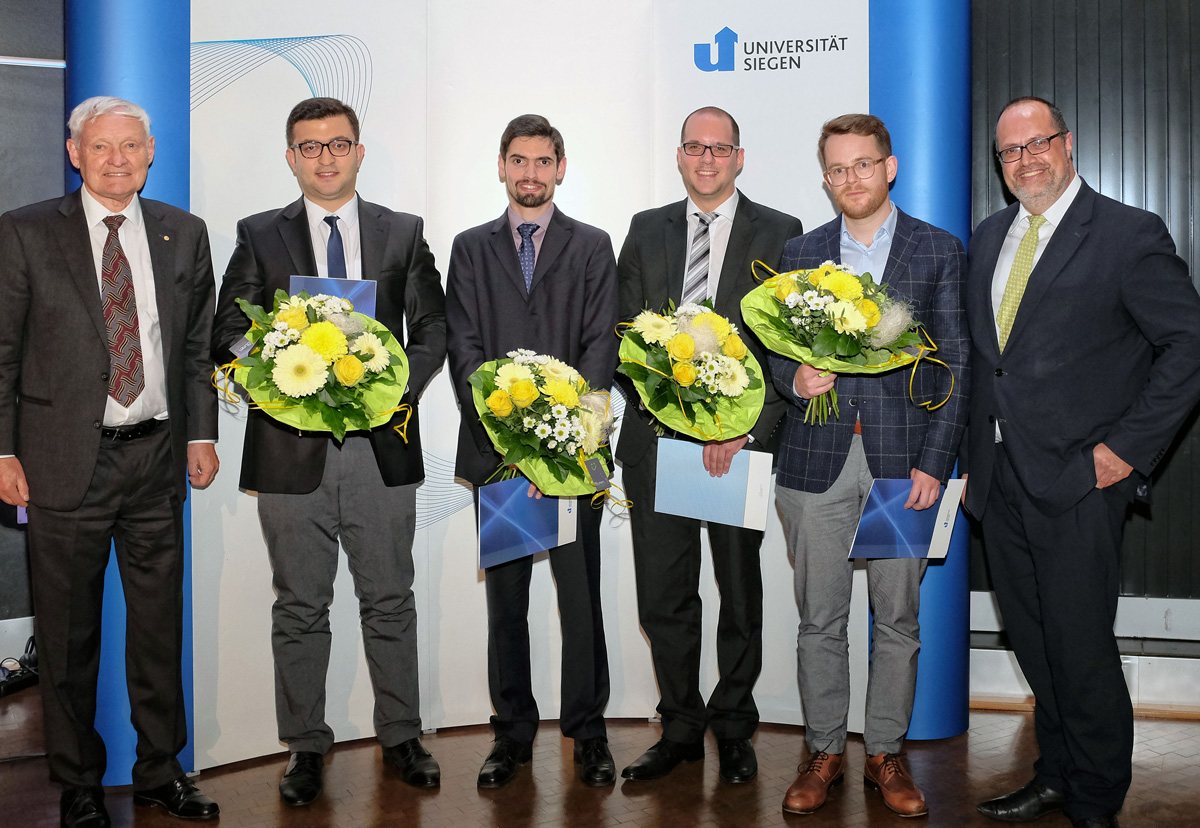 Before the Prime Minister arrived, a group of students had briefly conquered the stage. The chairwoman of the AStA (General Student Committee), Vera Fengler, spontaneously spoke out against Armin Laschet as a keynote speaker ("This is of no benefit to any student of this university") and refused to join the panel discussion with him to which she was invited, not wanting to be just an "accessory". Without responding to the offer of discussion of Armin Himmelrath, she left the room with the group.

Rector Burckhart emphasized that the students naturally have the right to speak. He respects the appearance as an expression of opinion, but distances himself critically from the statements about the Prime Minister.

The annual reception was framed musically by a Big Band under the direction of Hartmut Sperl.