International Guests at the University of Siegen 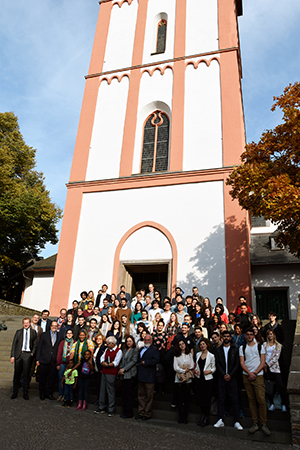 Brazil, Russia, China - around 80 exchange students and visiting scientists from all over the world came to the city, and Mayor Steffen Mues could welcome them in the historic council chamber of the city of Siegen. At least for the winter semester 2018/19, maybe longer, they will study and research at the University of Siegen. The degree programs for which the young people have enrolled in Siegen are just as diverse as the nationalities: from engineering to German studies to pedagogy. The international guests were accompanied by the staff of the Department of International Student Affairs (ISA), by the Welcome Center of the International Office of the University of Siegen and of the Erasmus Association ESN Siegen.

Mayor Steffen Mues and Prof. Dr. Peter Haring Bolívar, Prorector for Research and Junior Scientific Staff at the University of Siegen, welcomed the international guests and were delighted that so many young people have decided to conduct their study abroad in Siegen again this year: "One thing is for certain: the time abroad will be an unforgettable experience for you all, which no one else can take away from you - it's great that you were brave enough to take this step, "emphasized Mues. "Use the time to be productive, to get to know German culture and make friends," added Haring Bolívar in his welcoming address. Afterwards the power of music to connect cultures was shown: music on the ukulele and on the piano, as well as songs sung in unison, produced enthusiasm with the international audience.