Five young scientists from the University of Siegen have been honoured for their outstanding achievements.

When Prof. Dr. Bernard Rentier called for a revolution, the young academics in the Artur-Woll-Haus must have listened very carefully. The former rector of the University of Liège is an advocate of open science. One aim of this approach is to make as many scientific articles as possible freely accessible to as many people as possible, instead of having to buy expensive specialist publications as before. But this also poses problems and raises questions, such as the quality assurance of scientific articles. And it calls opponents onto the scene. But Rentier knows this: "There is no revolution without resistance."

It is a topic that will occupy the young researchers in the audience in the future. Five of them were particularly in the spotlight on this evening: they received this year's prizes for outstanding young scientists. The Prorectorate for Research and Junior Academics at the University of Siegen, together with the House of Young Talents, the graduate centre of the University headed by Dr. Daniel Müller, organised this entertaining evening. "The support of young academics has a very special significance for the University of Siegen. I am very pleased to be able to honour outstanding achievements and unique commitment again this year," said Prorector Prof. Dr. Peter Haring Bolívar.

The Dirlmeier Foundation awarded prizes to Dr. Mark Dang-Anh and Dr. Sarah Leweke. The latter dealt with the topic "The Inverse Magneto-electroencephalography Problem for the Spherical Mutiple-shell Model - Theoretical Investigations and Numerical Aspects" in her dissertation. The mathematician has developed a new approach to the calculation and description of electrical currents in the brain. Mark Dang-Anh received his doctorate with a thesis on "Protest as medial practice. A media linguistic investigation of synthetic protest situations with special regard to Twitter." The media scientist investigated the organization and coordination of street protests in digital media. 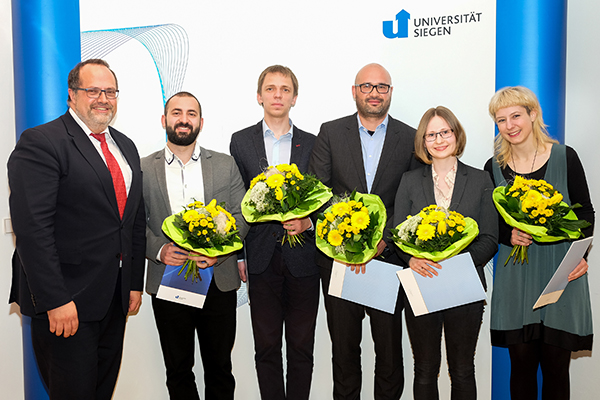 The Dirlmeier Foundation's Historian Prize was awarded to Dr. des. Clara Maddalena Frysztacka. The title of her dissertation is "Magazines. The construction of historical time in the modern age using the example of the Polish-language weekly press 'for many' at the end of the 'long' 19th century" and it describes how societies deal with historical time in its respective present. Dr. Aleksei Rusov was awarded the Study Prize for International Young Researchers at the University of Siegen for his dissertation on "Hadronic Effects and Observables in Semileptonic B-Meson Decays", in which the physicist investigated with new aspects of the theory of decay processes in particle physics. This year's German Academic Exchange Service (DAAD) Prize went to Amr Nahhas. He earned it for his extraordinary social commitment. Among other things, the mechatronics student helps other students in his free time with their robotics projects in the laboratory. 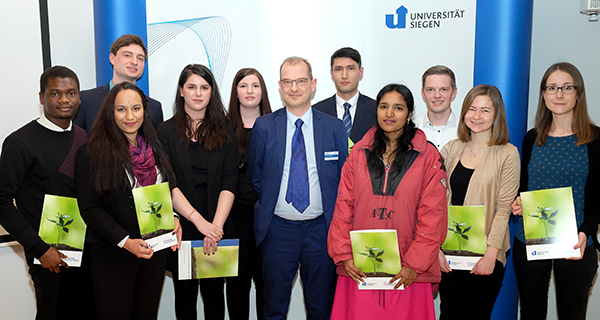