Prof. Dr. Holger Burckhart will remain rector of the University of Siegen for another four years. The University Electoral Assembly confirmed him in office with a convincing majority.

The chairman of the University Electoral Assembly, Arndt G. Kirchhoff, congratulated Burckhart: "We are very happy about this election and wish you much success and the necessary grain of luck for the coming years". Prof. Dr. Martin Herchenröder, spokesman for the selection committee, was also pleased with the outcome of the election: "In this process, all those involved played a very constructive role in finding a good and sustainable solution for the university. I am delighted that in Prof. Burckhart we have gained a rector for the next four years who promises continuity and development prospects at the same time".

"I am delighted to accept the election and thank the University Election Committee very much for the trust they placed in me," said the old and new Rector: "Over the past ten years, we at the University of Siegen have achieved a great deal together. I am looking forward to building on what we have achieved, together with all university members and to further developing our university in the coming years". It is about setting the course so that the University of Siegen can hold its own in national and international competition beyond the year 2025, explained Burckhart. The external framework conditions would be set at European and federal level: among others by Bologna 2020, the Excellence Strategy 2019, as well as the Pacts on Higher Education Financing adopted in spring (Higher Education Pact IV, Quality Pacts for Teaching, Pact for Research and Innovation).

In this context, it is important to further develop the research strength of the University of Siegen. Studies and teaching must be geared even more strongly to social challenges and the individual needs of students, Burckhart continued. The University's connection with the region will continue to play an important role in the future: "South Westphalia offers great potential from which we would like to continue to draw in the future. At the same time, the university is increasingly assuming social responsibility by developing concrete solutions to the pressing issues of our time and testing them together with the region. Digitization in industry and rural medical care are just two examples."

Burckhart has defined a total of eight fields of action for the development of the university in the coming years - starting with focused research focused on excellence, through the complete establishment of a university-wide culture of quality to structural development, which includes the major milestones of the relocation of two further schools to the center of Siegen and the core renovation and expansion of the Adolf Reichwein Campus. In addition, Burckhart would like to advance two further subject areas throughout the university: Diversity, equality and internationality on the one hand, and digitisation and artificial intelligence on the other. "I want to shape our university as a place of scientific expertise, but also as a social living space. It should not be an ivory tower, but a motor for the well-being of society as a whole," Burckhart stressed.

During Burckharts ten-year tenure, the University of Siegen had developed rapidly into an interdisciplinary research university. Twelve smaller departments were transformed into four profile-forming schools. With the founding of the School of Life Sciences in 2017, a new fifth Faculty was added. In research, more projects are currently in progress simultaneously than ever before - in total even more than in the first 30 years of the university's existence. In 2016, the German Research Foundation (DFG) established the Collaborative Research Centre (SFB) "Media of Cooperation" in Siegen. The project "Rethinking Medicine" on digitally supported medical care in the countryside has model character nationwide.

However, great progress has been made not only in the field of academic image building, but also in the volumes of third-party funding and student numbers. The number of students rose to almost 20,000. The range of offered courses was consistently expanded, most recently to include the "Psychology" course and the "Human Medicine Bonn-Siegen" cooperative course with the University of Bonn. In the coming winter semester, the new bachelor's program "Digital Biomedical and Health Sciences" will be added to the Faculty of Life Sciences.

A milestone in the structural development of the university was the relocation of the School of Economics, Business Informatics and Business Law to the lower castle in downtown Siegen in the summer of 2016. A large inner-city cafeteria and a lecture hall and seminar center are currently being built in the immediate vicinity. Since October 2017, the campus on Adolf-Reichwein-Straße has been undergoing large-scale campus modernization, including the renovation of the cafeteria and university library.

Prof. Burckhart received 39 out of 48 possible votes. The University Council (five voting members) voted unanimously for Burckhart. The Senate voted for Burckhart with 15 votes, six abstentions and three no votes. Thus Burckhart achieved the necessary majorities in the 1st ballot.

Further Information about the Process: 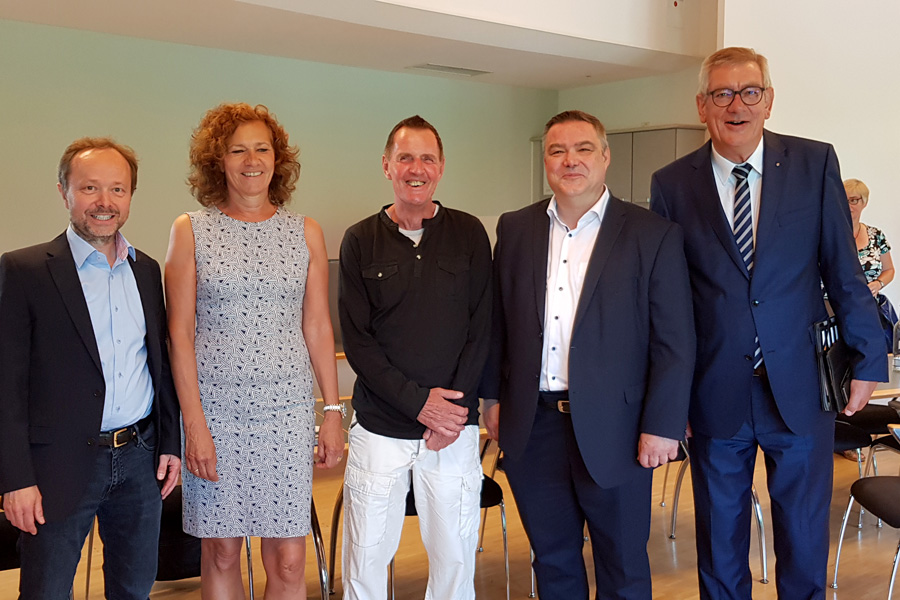