The China office of the University of Siegen in Beijing is celebrating tenth birthday. On this occasion, a delegation from Siegen travelled to China to deepen their partnerships with the universities there.

A six-member delegation from the University of Siegen visited various Chinese partner universities for one week. Under the leadership of Chancellor Ulf Richter and Vice Rector for Cooperation, International Affairs and Marketing, Professor Dr. Hanna Schramm-Klein, the trip took place on the occasion of the tenth anniversary of the China Office of the University of Siegen. The aim was to further intensify cooperation and forge plans for the future. "The trip was very successful because our partner universities are very interested in closer networking through exchange at all qualification levels and through joint research projects," said Professor Schramm-Klein.

The China University of Political Science and Law (CUPL) celebrated the tenth anniversary of the China Office. The China Office of the University of Siegen at the CUPL is established as a foreign representative office together with other contact offices of German universities. The China Office is in charge of the University of Siegen's manifold relations with universities in China and supports their university cooperations. In addition, the China Office advises Chinese students on their choice of subject or on a doctoral project and supports them in the application process. Under the title "Deepening Cooperation between German-Chinese Partner Universities", Ulf Richter and Prof. Hanna Schramm-Klein addressed greetings to the visitors and were pleased that so many alumni and long-standing partners took part in the forum. This was followed by specialist lectures on German-Chinese cooperation between Chinese and Siegen professors, in the humanities and social sciences with a lecture by Prof. Dr. Raphaela Averkorn and in the engineering sciences with a lecture by Prof. Dr. Peter Burggräf. This was followed by an alumni meeting. 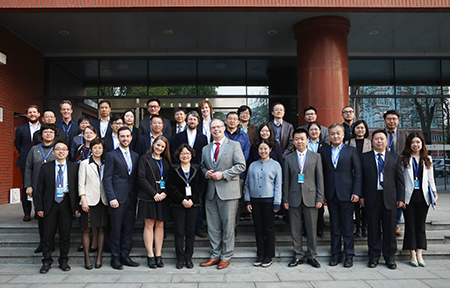 At the Beijing University of Technology (BJUT) the delegation from Siegen met with BJUT President Prof. Lio Gonghui. The partnership with the university in the Chinese capital has existed since 1987. Since then, students have been exchanging in both directions. In recent years in particular, the number of students from Beijing at the University of Siegen has risen sharply. Many of them come to Siegen after graduating from BJUT with a bachelor's degree, first learn German at the university for one year and then complete their master's degree here. During the discussion, representatives of both universities decided to work on further increasing the number of exchange students and establishing research cooperations.

The Siegen delegation also held talks at the Chinese-German University College (CDHK). The CDHK is a lighthouse project of bi-national university cooperation that has received several awards. Founded with funds from the German Federal Foreign Office, the aim is to train competent executives in both cultures.  Prof. Dr. Robert Brandt from the Chair of Material Systems for Lightweight Vehicle Construction at the University of Siegen has been teaching there for three years as a guest professor. Under the title "Doing Business in China", the CDHK has developed a new program to increase China's competence. "The program is a great opportunity for Siegen students to gain experience in China," said Richter.

At Nanjing Normal University (NNU), NNU Vice President Prof. Tian Lixin and Chancellor Ulf Richter solemnly signed a "Memorandum of Understanding" of Faculty I in the presence of Prof. Dr. Raphaela Averkorn and Prof. Dr. Friedemann Vogel - an agreement on the exchange of students.

The University of Siegen has been cooperating with universities in China for over 30 years. In the meantime, there are cooperations with many different universities in different regions of China, there are even international Erasmus+ partnerships and internship opportunities. The aim of the current effort is the establishment of innovative research cooperations.