The Fab Lab of the University of Siegen arrived in the heart of the city in 2018. The laboratory of a special kind in the Herrengarten, is a meeting place for researchers, creative do-it-yourselfers and children. However, the question of location still needs to be clarified.

A space for creativity and reflection, a space for doing and creating: in 2013 the Fab Lab of the University of Siegen emerged from a student initiative, for a little over a year now the creative workshop in the Herrengarten has been centrally located in Siegen. Reason enough for the creators to invite the public, which is (almost) always welcome, to this “laboratory of a special kind”.

"A place that would have to be invented if it didn't already exist," District Administrator Andreas Müller was impressed. Fab Lab stands for Fabrication Laboratory: a workshop, open to children, students, researchers, citizens, companies - ultimately to everyone - in which the community is written in capital letters. The users have at their disposal 3D printers, CNC milling machines, laser cutters, but also sewing machines, hand tools and the corresponding materials. After instruction, creativity can be given free rein. In addition, the Fab Lab is also a real laboratory, an experimental field for researchers of all disciplines. Scientists from the university carry out projects there and school classes experience teaching of a special kind. For example, an organic course modeled plant cells and printed them out on a 3D printer, a professor emeritus made his personal violin, and final theses from the technical college have already been written in the Fab Lab. The interactive city model "ZEIT.RAUM Siegen" in the Siegerlandmuseum is a result of the laboratory, tangible for the citizens.

The topic of digitization is predominant. "We want to promote digital creativity through joint action," said Prof. Dr. Volkmar Pipek of the Chair for Computer-Aided Group Work and Social Media. The importance of Fab Labs is comparable to the introduction of libraries for reading and writing.

There are around 1,600 such laboratories around the globe. The Fab Lab in Siegen stands out for its openness. "In this respect, we have a certain pioneering role in the public sector. Compared to other Fab Labs at German universities, we were able to offer an open company at an early stage," explained Oliver Stickel, one of the founders of the Siegen-based laboratory. Today, the Siegen team is also available to other universities as a contact partner for implementation. Stickel is particularly proud of the community spirit. "The community is the core of the laboratory. I have never experienced a Friday when it was empty here". Every Friday interested people are welcome at the "Open Lab" between 2 p.m. and 8 p.m. to experiment and do handicrafts.

The success of the creativity lab is also reflected in its growth - on the one hand, the number of visitors and users has risen continuously, and on the other hand, the premises have become larger and larger. It all started in 2013 at the Hölderlinstraße campus. From there it went to the Lower Castle and in 2018 finally to the rooms at the Herrengarten provided free of charge by the city of Siegen. "The Fab Lab has actually arrived at the right place: where life is raging. The laboratory gives citizens an insight into what the university can do," said University Chancellor Ulf Richter.

However, the location question for the future has not yet been clarified. The Siegufer building will be demolished and a park will be built on the site. The mayor of Siegen, Steffen Mues, promised that the building would probably be used until 2021, but an alternative must be found by then. And that - the head of the city and the Fab Lab community agreed on this - ideally centrally in Siegen: "Just like here I imagine the perfect implementation of the motto 'Uni comes into the city'", Mues praised the creative and innovative community. 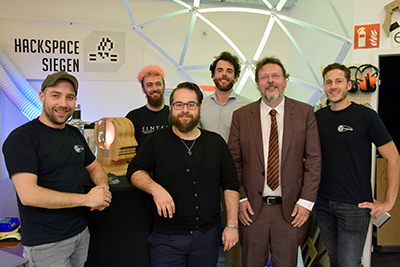