One day after being awarded the Nobel Prize for Literature, Olga Tokarczuk came to the new seminar center of the University of Siegen for a reading.

Everything had been planned for months. On 11 October the reading with the Polish author Olga Tokarczuk was to take place at the University of Siegen in the Villa Sauer (House of Science). But one day before the date the big news arrived: Olga Tokarczuk receives the Nobel Prize for Literature. "We were all very happy, but we also feared: Is she coming - or isn't she?", University Chancellor Ulf Richter described the situation. Tokarczuk came - and at the university the event was reorganized at short notice in order to create a worthy framework for it. The reading was moved from the foyer of the Villa Sauer to the new and much larger seminar center of the university in Obergraben 25, which had only been completed the day before. Almost 200 enthusiastic listeners came and accepted a longer waiting time. The arrival of the freshly baked Nobel Prize winner was delayed by around two hours due to short-term media appointments.

With standing ovations and long applause Olga Tokarczuk was finally welcomed by the audience in Siegen. "Thank you for waiting so long for me," said the author. "The news from yesterday has not quite reached me yet. I still need time to understand that I am a Nobel laureate". Despite all the excitement, Tokarczuk took her time for the listeners in the seminar center. She told in detail and with great commitment about her work "The Books of Jacob " - a historical novel about Jakob Frank, an important figure in 18th century Poland, an Ashkenazi Jew and leader of the Frankist movement. "Actually, I had planned to work on the book for one year. It would turn out to be eight years," Tokarczuk said.

She researched the history of the Frankists thoroughly and precisely. And she often stumbled across details: "Once, for example, I wrote how a potato dish is served over a meal. Until I found out: There were no potatoes in the region at that time," the author smiled. The novel "The Jacob's Books" not only tells the story of Jakob Frank, but at the same time also presents a comprehensive picture of Europe at that time. "Much of this, however, is still very topical. People had similar problems 250 years ago as we have today," Tokarczuk stressed. 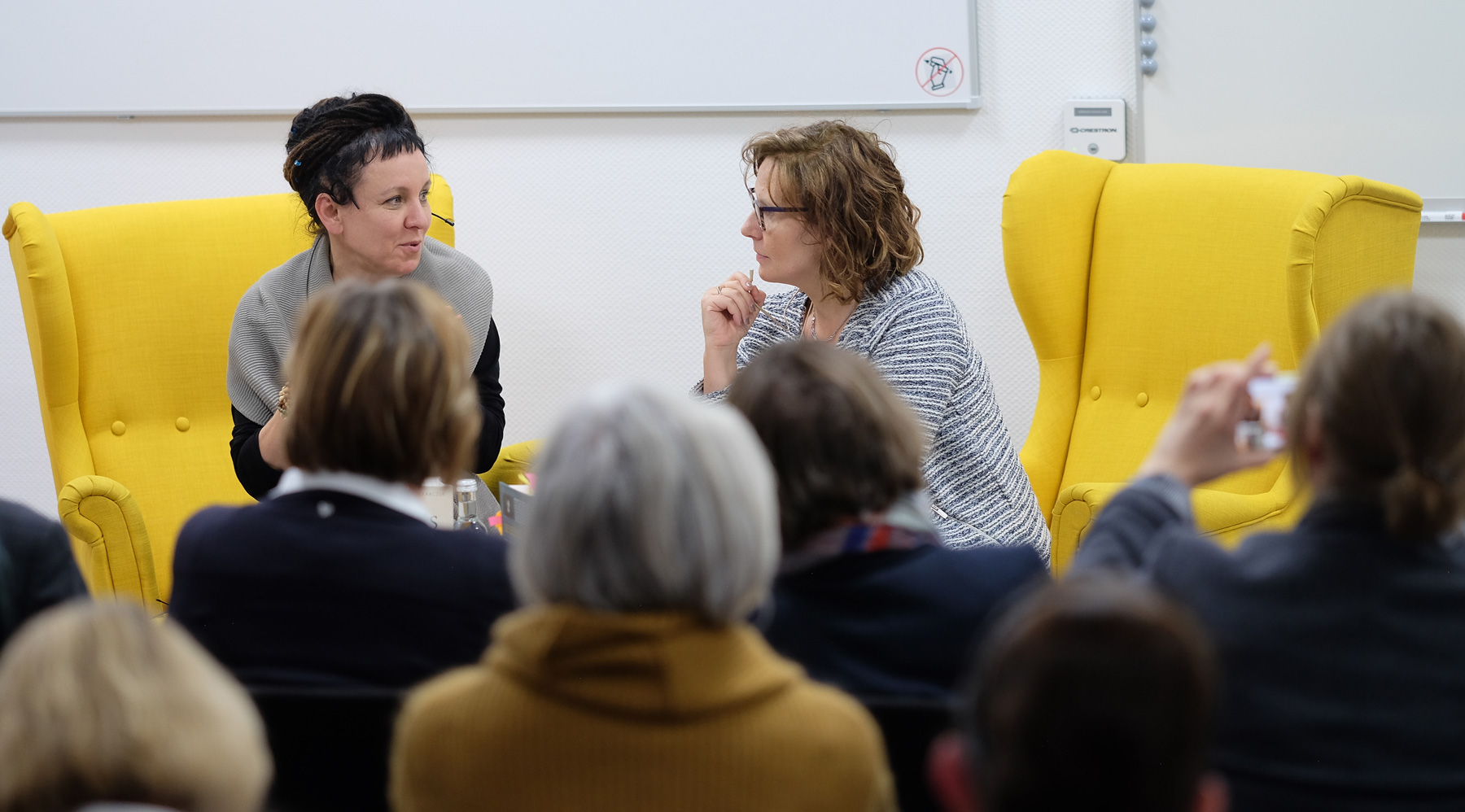 Dr. Natasza Stelmaszyk from the School of Philosophy at the University of Siegen led the reading and acted as interpreter at the same time. Excerpts from the German translation of the novel were read by Anna Maria Weber (also from the University of Siegen). In order not to make the waiting time too long, the team improvised without further ado and put the audience in the mood for the novel by reading passages before the author arrived. The actor Armin Nufer, who had come from Wiesbaden especially for the Nobel Prize winner and who read from Tokarczuk's book "Flights", also took part spontaneously.

"It is a great honor to welcome Olga Tokarczuk one day after the announcement of the Nobel Prize. Such an event is really unique," said Stelmaszyk, who had invited Tokarczuk to Siegen. Ten years ago the author had already been to a reading in Siegen, the literary scholar reported. Since then, she has been invited twice (for the first time a year ago for "vielSeitig. European Literature Festival Siegen") - but that never turned out to be anything: "Both times important award ceremonies intervened. Now we have invited you to Siegen for the third time - and you have received the Nobel Prize," said Stelmaszyk.

Before her reading Olga Tokarczuk signed the Golden Book of the City of Siegen. She was welcomed by the deputy mayor Jens Kamieth. University Chancellor Ulf Richter welcomed the author: "A great honor for the university and the city of Siegen".

The reading with Olga Tokarczuk had been organized by the staff unit "Science in the City" of the University of Siegen (Mrs. Katja Knoche) and the School of Philosophy (Seminar for English Studies, Prof. Dr. Daniel Stein) in cooperation with Polonica nova - a series of events with Polish literature and culture (initiative of Dr. Natasza Stelmaszyk). It was part of a planned reading tour in the run-up to the Frankfurt Book Fair. 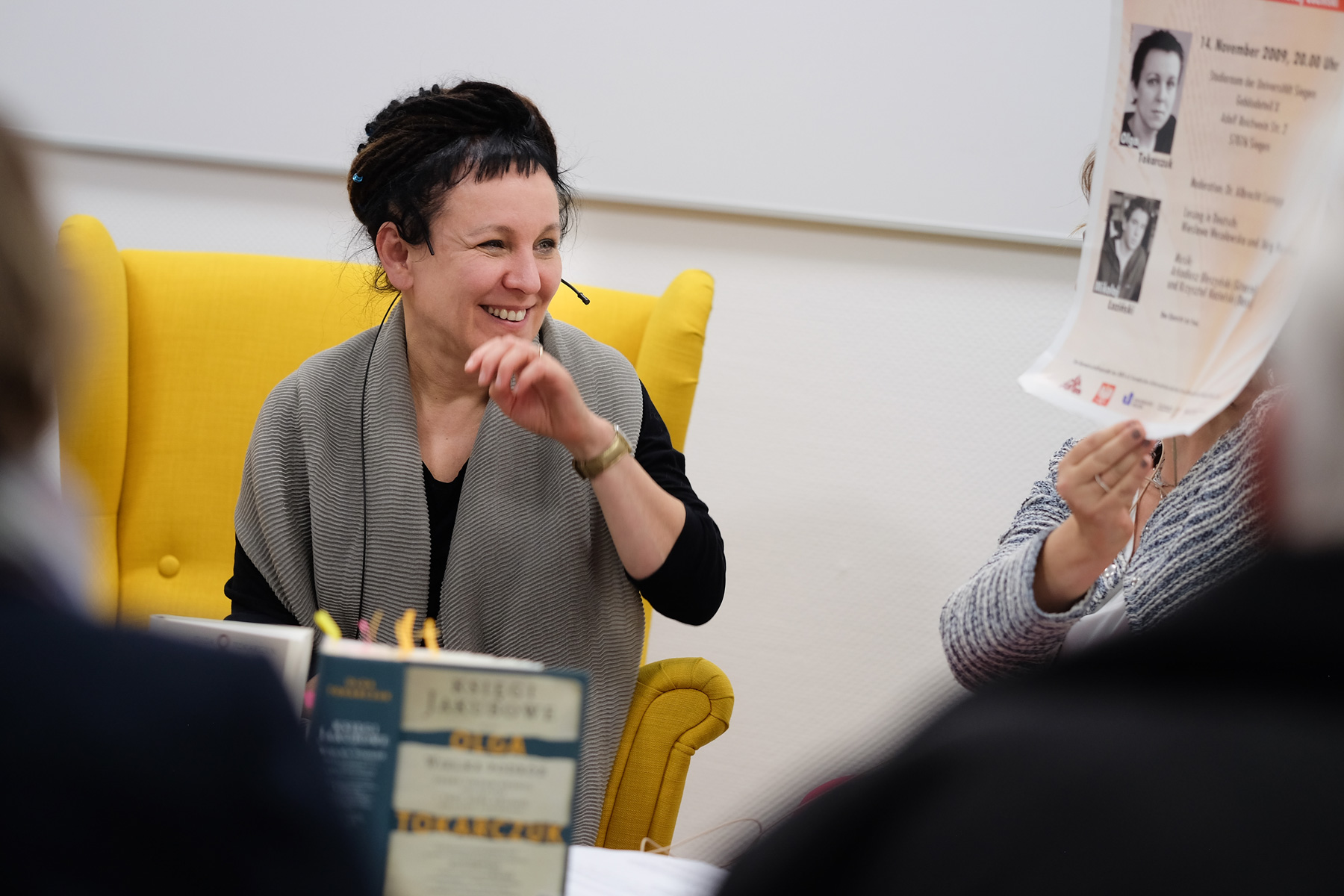