The Siegen researcher Lisa Randolph, here in front of the experiment station of HED (European XFEL).

A study by a team from European XFEL and the University of Siegen has shown for the first time that single X-ray laser pulses can be used to observe ultrafast changes on material surfaces with unprecedented depth and time resolution.

In a world first, an international team of scientists led by European XFEL and the University of Siegen has demonstrated that the intense pulses produced by an X-ray laser can be used to investigate ultrafast processes occurring on and just below material surfaces with unprecedented depth and time resolution. This allows researchers to capture processes that are more than a billion times faster than what could previously be observed. The results, which the team has just published in Physical Review Research, pave the way for versatile applications that rely on our understanding of ultrafast surface dynamics. Examples are the laser processing of material surfaces to create tailor-made nanoscale structures or the realization of compact laser-based particle or radiation sources.

Using intense laser pulses, nanoscale surface structures can be created with optimized optical, mechanical, and chemical properties. Such tailored structures play a decisive role in many fields with significant societal and economic impact. They can be used to fashion antimicrobial coatings, to improve the bonding of dental implant screws with bone, and to build advanced optical components with high damage thresholds. To be able to better create these structures and comprehend their effects, scientists first need to observe and understand the ultrafast processes that happen when the intense femtosecond laser pulses used in the surface processing hit the material and react with it.

“At synchrotron radiation facilities, the time resolution of such surface studies has so far been limited to a few milliseconds—that is, thousandths of a second,” explains Lisa Randolph, postdoc at the University of Siegen and first author of the study. “We have now demonstrated that single X-ray laser pulses can be used to jump to picosecond or even better time resolution—that is, to trillionths of a second, which is more than a billion times faster. And thanks to our special setup, which uses X-rays hitting the material surface at a shallow angle, in so-called grazing incidence, we can observe the processes on and right beneath the surface with nanometre depth resolution.”

The team achieved the technological breakthrough at the SACLA X-ray laser in Japan by combining the surface-sensitive X-ray grazing-incidence technique with the X-ray pulses produced by SACLA. This novel methodology enabled the researchers to observe the ultrafast changes in the surface and subsurface density profile, induced by a laser pulse hitting the material, with nanometre (billionths of a metre) space and picosecond (trillionths of a second) time resolution. To better understand the processes involved, the team then compared the experimental results with data from simulation models. “Our experimental data challenge state-of-the-art plasma simulation models,” reports Mohammadreza Banjafar, PhD student at European XFEL and the Technical University of Dresden and second author of the study. “Surprisingly, the widely used hydrodynamic simulations do not correctly predict the density dynamics measured in our experiments.” So-called particle-in-cell simulations, on the other hand, which had previously been considered inadequate to describe such intense interactions between light and matter, showed a much better agreement with the experiment.

“However, many physical effects are still missing even in these particle-in-cell simulations,” says Motoaki Nakatsutsumi from European XFEL, who was the principal investigator of the experiment. “Our method will help to further improve the modelling of laser–solid interactions and to devise new applications for them.” In particular, the researchers expect the unprecedented possibilities enabled by their new technique to open up new perspectives for laser material processing and high energy density science. 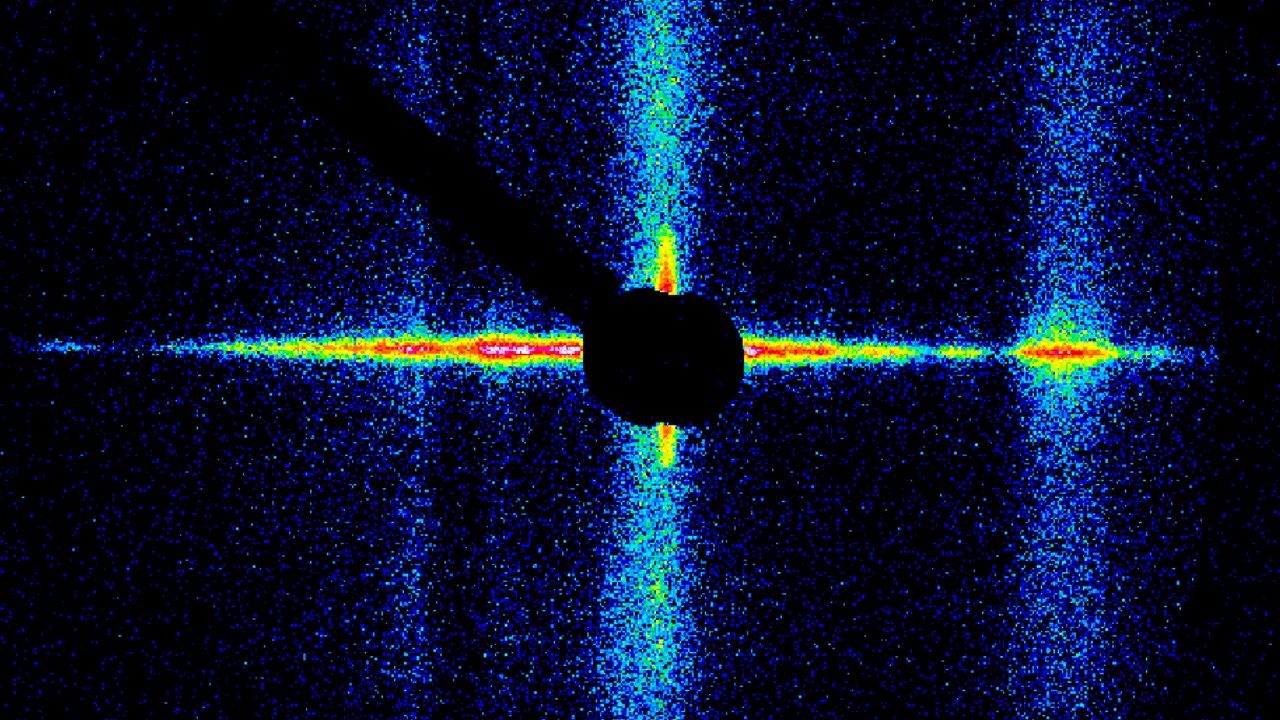 Grazing-incidence small-angle X-ray scattering image obtained from a multilayer sample, measured using single X-ray pulses of the SACLA X-ray laser in Japan. The central black circle is the beamstop used to block the main mirror-like reflection peak, which is much more intense than the scattering pattern. The pattern contains information on the depth-resolved density profile (horizontal axis) and the surface structure (vertical axis).