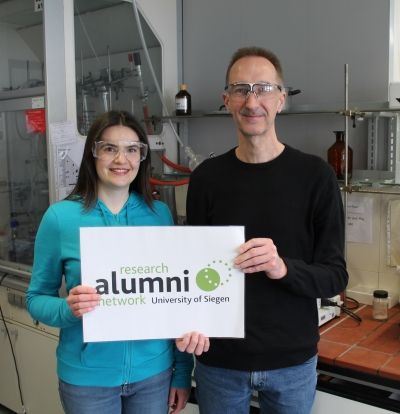 Nucleic Acids and photochemistry: a bridge from Moscow to Siegen.

Dr. Berdnikova and Prof. Dr. Ihmels got to know each other in 2011, when Dr. Berdnikova was a PhD student in Russia and received a DAAD scholarship to come to Siegen for 3 months. Subsequently, she spent several months in Siegen each year between 2013 and 2016 to work on collaborative research projects. Most notably, the scientific contributions provided by Dr. Berdnikova during her stays at the Department of Chemistry and Biology constitute a main centerpiece of a cooperation between the group of Prof. Dr. Ihmels and Prof. Dr. Fedorova, Institute of Organoelement Compounds of Russian Academy of Sciences, Moscow, Russia. In this long-term cooperation, funded by the DFG, RSF, DAAD, and the EU, the partner groups share their experience, competences and expertise in the fields of photochemistry, physical-organic chemistry and bioorganic chemistry aiming at the development of novel functional DNA binders. In the context of this cooperation, Dr. Berdnikova was the third PhD student from Moscow who came to Prof. Ihmels’ group to study interactions of organic dyes and photoactive compounds with DNA. The DAAD project of Dr. Berdnikova was very fruitful and led to the publication of a joint paper. Additionally, these results constituted a chapter in the PhD thesis of Dr. Berdnikova which she defended after she came back to Moscow from Siegen. After her graduation, Dr. Berdnikova focused her research interests on the studies of interactions of photoactive compounds with nucleic acids. Finally, in 2017, Dr. Berdnikova terminated her employment in Russia and moved to Siegen to perform her Marie Skłodowska-Curie project in the group of Prof. Dr. Ihmels.

The scientific exchange with the University of Siegen and the corresponding stays as visiting scientist had a significant and lasting effect on the career of Dr. Berdnikova. Specifically, the DAAD scholarship in 2011 turned out to be a crucial point in her career because it allowed her to establish this collaboration and gave the opportunity to develop as a scientist under the scientific guidance of Prof. Dr. Ihmels. In retrospect, she concludes: "Starting from my very first days in Siegen, Professor Ihmels always gave me full scientific freedom and at the same time, I always felt his support. It was extremely important for my development as a young scientist because I learned how to think and act independently. After all, this first stay as doctoral student, along with the following visits in Siegen as postdoctoral fellow, comprised the most successful and impressive part of my scientific career." The collaboration with the University of Siegen introduced Dr. Berdnikova to the exciting and interesting world of nucleic acids chemistry that very quickly led to the desire to focus her future research on this field. Her dedication to this research area and her diligence and efficiency as a researcher are documented in seven publications on light-controllable interactions of small organic molecules with DNA, on supramolecular assemblies of photoactive compounds in the presence of DNA and even on photochemical synthesis of silver nanoparticles on a DNA strand. Most notably, the experience that she gained during her stays in the group of Prof. Dr. Ihmels finally provided the basis for her ongoing Marie Skłodowska-Curie project. This project is a new important milestone for her because with this individual fellowship she turned into an independent principal investigator who is responsible for the planning, execution and documentation of the whole project starting from scratch.

The Marie Skłodowska-Curie project of Dr. Berdnikova is focused on design, synthesis and investigation of photoswitchable binders for naturally occurring ribonucleic acids (RNAs). Due to its multiple functions in cells, RNA represents an important target for therapeutic agents or analytical probes for investigation and treatment of bacterial and viral infections, some genetic diseases and cancer. Nevertheless, up to now RNA has not been extensively used as a therapeutic target because clear design principles for RNA-binding molecules are still unknown. Along these lines, the aim of the project of Dr. Berdnikova is to explore the field of photoswitchable binders for naturally occurring RNA, for example human immunodeficiency virus (HIV) RNA, and apply light to control the properties of these binders. In her science blog [https://photorna-blog.blogspot.com/], Dr. Berdnikova shares the obtained results in an easily understandable way and explains interesting facts about RNA, light and photoswitchable organic molecules.

In future, Dr. Berdnikova plans to proceed with her academic research career. She says: "I would love to continue my research at the University of Siegen and do a habilitation under the mentorship of Professor Ihmels."