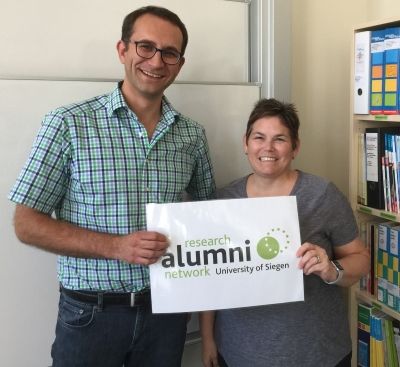 Prof. Dr. Clark, who is an Associate Professor of Mathematics Education at Florida State University, has recently completed her sixth research visit to Siegen. She has been working closely with Prof. Dr. Witzke, coordinator of the University of Siegen Mathematical Education Department. Together they have been conducting research into how mathematics is taught at schools and universities. A good understanding of mathematics is important for many disciplines, not just for Science, Technology, Engineering and Mathematics (STEM) subjects but for quantitative analysis across all fields of study.

Professors Clark and Witzke have known one another since 2011 when they met during Prof. Dr. Clark’s visit to the University of Cologne. But it was in 2014, after meeting again during the seventh European Summer University, that their close scientific collaboration began. At this event they both recognised that their research topics were very similar. Afterwards they both had the chance to discuss the potential for future cooperation during a guided tour of Freetown Christiania in Copenhagen. While they had not learnt so much about Christiania by the tour’s end, they had instead established a foundation upon which future scientific exchanges would take place. Prof. Dr. Clark made her first visit to Siegen in December 2014. Since then they have made multiple research visits to one another’s home institutions, in order to collaborate, present and publish their research together.

Both professors are very interested in how to solve a difficult problem: the difficulty that students experience when they transition from school to university mathematics. This transition is often so difficult that it leads to the relatively large percentage of students studying maths or math-related subjects who drop out at some point during their studies. In Germany this number is approximately 50% of students at the bachelor level. Even amongst those who stay on, many of them do not feel as confident as they would like to in their mathematical ability. This issue is not just one faced by students in Germany or the United States, but around the world, and has been documented in numerous research papers.

For students the issue is the often difficult transition between school and university. This transition is difficult because mathematics is taught very differently at both levels. At school mathematics is taught in a more tangible way, using concrete examples and objects. In contrast, mathematics at university is much more formal and abstract. Over the last 20 years, teaching methods and content have greatly changed in schools, whereas in universities they have remained largely unchanged, meaning that over time, these two institutions have moved apart in their approach to mathematics education. This difference in expectations and outcomes means that students often experience an “abstraction shock” while they adapt to this new style of learning. It is this difficulty which leads to a high drop-out rate for students studying mathematics and mathematics-related subjects.

What makes this transition particularly difficult for students is that they are usually not made aware of it until they reach university. For other subjects in Germany this difference is made clear in their name, for example “Religion” is taught in schools, whereas the corresponding course at universities is “Theologie”; schools teach “Deutsch” but universities teach “Germanistik.” Mathematics does not have a different title at University, despite there being a substantial difference in content and approach. In order to support students through the transition, Professors Witzke and Clark have designed special seminars to support students. As well as offering substantive support, these seminars also make the differences in mathematics education at schools and universities explicit; they explain exactly what is different and why. To show why there is such a large difference they use historical sources, which may sound peculiar, but mathematics itself has over the past few decades undergone a transition similar to that which the students themselves must go through. Both professors hope that allowing students an insight into this historical context will help them to adapt to the new teaching methods at university.

For Prof. Dr. Clark what is particularly unique is that the interventionist approach of the newly-designed seminars. While much research has been conducted around the world about the transition problem, it is mostly viewed from an institutional perspective, examining how many mathematics students graduate etc. Not as many researchers have applied their findings to try to actually address the issue. By working with feedback from students, Professors Clark and Witzke aim to make these interventions something that is done with, rather than to students. Prof. Dr. Clark is also impressed with the academic atmosphere here at the university, which she described as being “one of the most well-connected, inviting, critically thinking, motivational workplaces that I have been in.” She also finds the sise to be ideal, as many of the positive aspects of Siegen are often lost in the sise of larger institutions. The different departmental structure of the University provides a better context for these kinds of research. Many institutions have one education Department for all subjects. Whereas Mathematics Education at the University of Siegen is contained within the Mathematics Department, thus allowing greater collaboration across all who are involved with Mathematics at the University.

Prof. Dr. Witzke states that for these kinds of projects to be successful, it is necessary to work together with experts from all over the world. His project benefits greatly from Prof. Dr. Clark’s methodology, which is very strong in many kinds of qualitative data analysis. Her approaches are very innovative by both German and American standards. Prof. Witzke is also very pleased with the influence of Prof. Clark upon his graduate students, many of whom were fortunate enough to have Prof. Dr. Clark as an expert reader for their theses. It is clear that they have benefited from the ideas and feedback that only an outside perspective can bring. Despite much of German education policy still being made on the national level, there is still a clear need for education to make connections at an international level. The research also benefits greatly from her cultural perspective. There are so many new ideas which come from the United States to Germany, and while many students have an impression from popular culture. Prof. Dr. Clark is able to provide a first-hand view of mathematics education in the United States, particularly during the seminars which she led during her time in Siegen. He concludes our interview by stating that “for us it’s an honour to have her here, and we very much appreciate that she is working together with us on the project."

After having spent some time talking with these two professors, it is clear that they have a warm academic relationship, and a mutual passion for helping mathematics students through a very difficult time in their studies. They already have plans for how their scientific collaboration will continue into the future; the next step is that Prof. Dr. Witzke will make a research visit to Prof. Dr. Clark’s home institution in October. We look forward to seeing Prof. Dr. Clark again in Siegen soon.