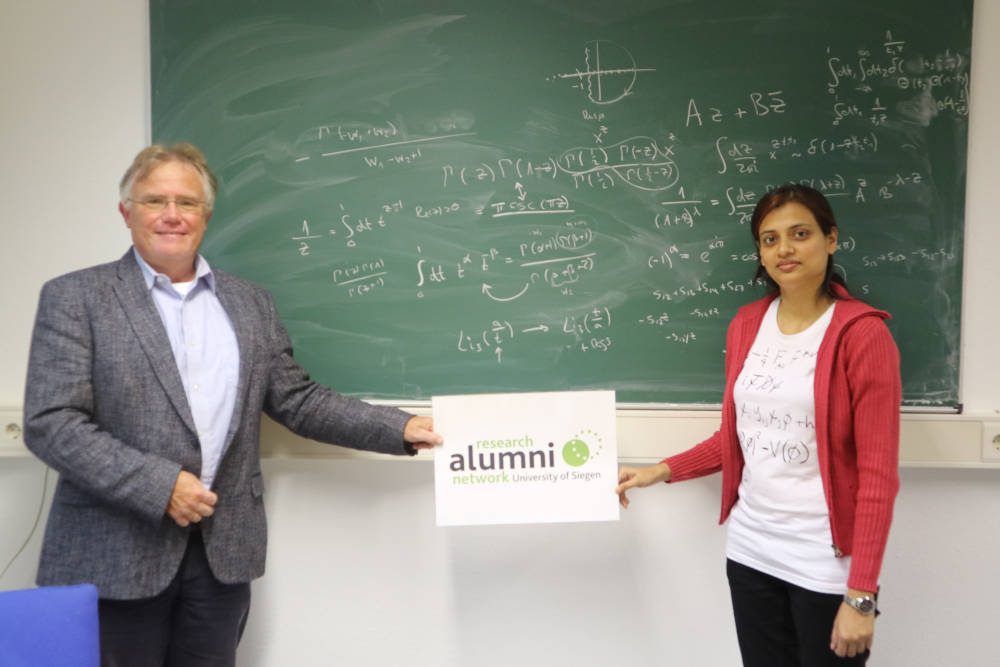 Hadrons, Leptons, and Mesons –
Understanding the Building Blocks of the Universe.

The University of Siegen is by no means a particularly large university, but despite this it is able to punch above its weight in many exciting fields of research. This success arises as a result of many factors, including a supportive research environment, subject expertise and an extensive network of international research collaborations. One field which is particularly reliant upon international cooperation is particle physics phenomenology, which combines together theoretical modelling and experimental practice to better understand interactions on a subatomic level. One reason for the prominence of international cooperation in this field is the sheer cost of the necessary experimental work, which requires apparatus on a scale too big for even the richest and largest institutions to possibly afford. Perhaps the most prominent example of this is the Large Hadron Collider (LHC), with an annual budget of approximately € 1 billion. For this reason, the LHC part is financed by over 100 different countries, each coming together to better understand the phenomena which underpin the laws of our universe.

One of the world’s largest particle physics phenomenology research groups is based at the University of Siegen. This group is currently led by Prof. Thomas Mannel, and features many talented researchers from across the world, such as Dr. Rusa Mandal. Dr. Mandal first became aware of Prof. Mannel and his research by reading some of his publications while doing her PhD at the Institute of Mathematical Sciences in Chennai, India. Seeing that their research focuses aligned, she arranged to come to Siegen in 2017 in order to give a seminar, and she kept in touch with Prof. Mannel afterwards. While she was doing some postdoctoral work in Spain, she and Prof. Mannel agreed that she should apply for an Alexander von Humboldt fellowship to allow her to come and undertake research in Siegen. Her application was successful, and she came to Siegen in August 2019 to begin her two-year research visit.

Many interactions which occur between particles are explained by the standard model of particle physics, and while this theory has been able to explain many different aspects of how particles interact on a subatomic level, there are still many elements of it which have not yet been experimentally confirmed. Dr. Mandal, Prof. Mannel and their colleagues in the Theoretical Particle Physics group are working to improve the accuracy of models in predicting experimental outcomes. The outcomes of these experiments are computed to an incredibly small degree, and when this is done, discrepancies often emerge between theoretical predictions and the experimental results, so phenomenologists check for the sources of these discrepancies, and if necessary, adjust their models to better reflect real life data. Dr. Mandal’s research is particularly focussed on a type of subatomic particle called B meson, which is difficult to observe due to its instability resulting in it only existing for a tiny fraction of a second before it decays into other types of particle.

For Dr. Mandal the University of Siegen offers an environment which is large enough to feature many researchers in her field with whom she can discuss her research, without it being too large to prevent it being possible to know and meet with everyone. She very much enjoys the research environment here and in Germany more generally. In the longer term she would like to gain a permanent position in India, in order to be closer to her family.

For Prof. Mannel, having a high concentration of specialists in this particular field of physics was part of his strategy when the group was founded 15 years ago. Most institutions concentrate more on having a broad range of different types of physics research. This can make it difficult for physicists from across the department to work together because their research is so specialised that an expert in string theory may not be able to fully understand and discuss the research of particle physicist, and vice versa. Having a high concentration of phenomenologists allows for more collaboration, and this makes the department very attractive for researchers from all across the world to come and visit.

In his role as the head of the Theoretical Particle Physics group, as well as the prorector for Research and Young Scientists, Prof. Mannel feels a strong responsibility toward ensuring that the next generation of scientists and researchers are able to fulfil their potential. For this reason he is most grateful to programmes such as the Alexander von Humboldt foundation for making these kinds of international research collaborations possible.

This article is based on an interview with Dr. Rusa Mandal and Prof. Dr. Thomas Mannel and was written by Benjamin Wrigley.