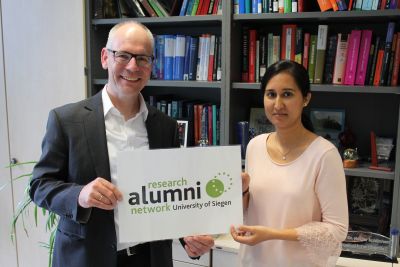 Dr. Nowsheen Goonoo is based at the Centre for Biomedical and Biomaterials Research (CBBR) at the University of Mauritius, a focus of her research is on medical applications of polymers derived from two natural materials found in and around Mauritius: seaweed and Aloe vera.

Her research has been conducted in cooperation with the Physical Chemistry I Department at the University of Siegen, headed by Prof. Dr. Schönherr. This cooperation happens remotely through the sharing of samples and data, and also in person during research visits.

Dr. Goonoo’s first visit to Siegen in 2016 lasted approximately one year. It was supported through a Postdoctoral research grant from the Alexander von Humboldt foundation. The purpose of her research during that time was using seaweed and Aloe vera derived polymers to fabricate nanofibrous materials, which could then be used to grow skin and bone derived cells. This research has the potential to have a wide variety of applications, for example being able to grow new skin is invaluable for treating skin burns. This research is showing promising results and has resulted in several joint scientific publications.

Her second visit to Siegen was for two months in 2018, and looked at how to use these seaweed and Aloe vera containing nanofibrous materials to capture circulating tumour cells traveling through the blood stream. This is possible by functionalising these materials with an “anti-antibody”, which functions like a lock and key. The fibres have the locks on their surface, and the tumour cells have the key, which fit into the surface, preventing them from travelling further. There are two different kinds of fibres, which they are currently investigating, a smooth cylindrical fibre and a one with circular discs called the “shish kebab fibre.” By altering the topography of the fibres it is possible to vary the number of captured cells on the surface. This research has both theranostic and diagnostic applications. For instance, the number of cancer cells captured by these fibres can give us an idea of whether cancer treatments are effective or not.

Prof. Dr. Schönherr first came into contact with Dr. Goonoo and the CBBR at a Polychar conference in the South Korean city of Gwangju in 2013. After seeing the presentations of one another’s work, they realised that they were both working with a similar class of materials and so they decided to start discussions on future scientific collaboration. Since then, both departments have begun to cooperate closely.

International cooperation has been hugely valuable for both research groups. Dr. Goonoo and other researchers from the University of Mauritius benefited from Siegen’s expertise in cell work, and the ability to analyse samples using Atomic Force Microscopy, which is not yet available in Mauritius. Whereas Prof. Dr. Schönherr and his team have benefited from expertise in a class of materials with which they weren’t previously familiar. Both seaweed and Aloe vera grow in and around Mauritius, so they have much experience in studying the potential benefits of these natural materials. As stated by Prof. Dr. Schönherr, many scientific breakthroughs come through by a series of coincidences, and these coincidences can only occur by being open to working with researchers from different backgrounds and areas of the world.

Dr. Goonoo and Prof. Dr. Schönherr make clear that their main priority is finishing their current research and that they will continue to collaborate in future. Exactly how long their current research will take to finish is not clear, because it is not possible to know exactly where this research will lead. There are so many different parameters to test with regard to improving the effectiveness of these cancer cell capturing materials, such as the fiber diameters, pore sises (empty spaces in between the fibers) and spacing in between the circular discs in the ‘shish-kebab’ fibers. These tasks will be divided between Siegen and Mauritius, according to each research group’s expertise and equipment. Modern forms of communication and the ability to share samples relatively easily enables close and constant scientific cooperation. Prof. Schönherr has also contributed to a grant application with the University of Mauritius for funding by the Tertiary Education Commission of Mauritius, which was very recently approved for funding, thus enabling them to have a joint PhD student based between both regions. The longer term goal will be for both sides to jointly publish the results in high ranking international journals.

Dr. Goonoo finds that Germany offers more opportunities and funding for scientific research. She found Siegen in particular to be an ideal place to conduct her research, she found the people in Prof. Schönherr‘s group to be warm and welcoming, and she also found the interdepartmental cooperation impressive, not just within the Chemistry Department, but it was also possible to use equipment from the Physics Department to conduct scientific analysis. She also enjoys the wider city, saying that its small sise made it relatively easy to feel at home very quickly. However the climate is much colder than Mauritius, so it was unfortunately necessary for her to buy her very first set of winter clothes.