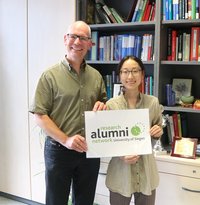 Dr. Dou first came to Siegen in 2016 as a recipient of a scholarship from the Alexander von Humboldt Foundation. In Siegen she completed her post doctorate in the Physical Chemistry I Group, which is led by Prof. Dr. Schönherr. Her project in Siegen researched the role of hydrogel to monitor and control cell behaviour. After finishing her research, she then returned to China, where she became a researcher at the Shanghai Jiao Tong University. She returned to Siegen in 2018 to once again collaborate with her former colleagues. Dr. Dou has known Prof. Dr. Schönherr for a long time, they met through her PhD advisor in Shanghai, who was himself a PhD student of Prof. Dr. Schönherr.

Despite her modesty, it is clear to see that Dr. Dou has contributed a lot to the scientific research taking place in Siegen. She is co-author of multiple publications resulting from various research projects. One of those projects uses naturally derived substrates such as from rose petals which, with a bit of experimentation, are able to develop surfaces which can capture circulating cancer cells. This is very helpful for diagnosing the progression of cancer. These natural structures are used because they are very difficult to replicate artificially. Rose petals in particular have a structure which is well suited for this purpose, because the structure is organised in a hierarchical manner. Using these structures Dr. Dou has been able to achieve high cancer cell detection efficiency. Dr. Dou’s research is also linked to the research undertaken by Dr. Nowsheen Goonoo, who uses electrospun substrates derived from seaweed and Aloe Vera to achieve a similar goal.

Another important project in which Dr. Dou is involved is looking at methods for testing the effectiveness of drugs used in cancer treatment. Current methods of drug testing often rely on 2D cell cultures, in which the cells will spread out to form a 2D sheet. The issue is that in our bodies cancer cells form 3D aggregates called “spheroids”, meaning that tests taken using 2D cell sheets are not a good indicator of the drug’s effectiveness in the human body. To address this, Dr. Dou has managed to pioneer a very simple, yet effective method which allows cell cultures to form 3D spheroids, which more closely resemble those found in the human body, significantly improving methods for testing drug efficiency.

After her visit to Siegen is finished, Dr. Dou hopes to return to Shanghai for a new position. Both universities are currently working on a project application to set up a permanent joint research program with a cluster of research groups in Shanghai. If this proposal was accepted, then there would be funding provided to allow for further academic exchanges with Shanghai Jiao Tong University. Prof. Dr. Schönherr has been to Shanghai a few times to visit his former PhD student, Prof. Dr. Feng, as well as Dr. Dou, and other researchers. He enjoys the atmosphere of the university as well as the food. He will travel there again in October.

In future, they have many different ideas where they can take their research. An example is their work with hydrogel formation, where they have a very nice system in Shanghai which will help them to adjust some of the gel’s material properties. There are number of possible variations but there are also some properties which are currently not fully understood. For instance chirality, i.e. the handedness of structures, similar to the difference in orientation between a left and right-sided screw. In nature molecules often show the same phenomena, some of the fibrous tissue inside the body also exhibits chirality, and this chirality can influence how cells react to treatment. If something so fundamental was fully understood, then it could lead to a whole range of different applications.

Dr. Dou finds that in Siegen, she is given a lot of support on things such as maintenance of lab equipment, which allows her to completely focus on her research, allowing quicker experimental outcomes. She also enjoys the fact that Siegen is a relatively small town, quiet and with much less congestion. It is the little things that make her time enjoyable, for instance, she is always able to get a seat on the bus in the morning, the air is very clean, and she can enjoy the nature outside. Both Dr. Dou and Prof. Dr. Schönherr observe the academic culture in Shanghai to be a little different to that in Germany. In Germany there is of course competition between groups, but not so much within the groups themselves, whereas in China, the pressure is greater to perform highly within the group. Dr. Dou observes that the population in China is of course many times larger than in Germany, which probably contributes to these more competitive dynamics.

It is clear to see that this academic exchange has benefited both sides, allowing the formation of new ideas to occur. This is particularly important because of differing areas of expertise, expertise cannot be owned, or bought, it is developed from years of careful practice. This expertise is brought to Siegen by visitors, both academics agree that this is something that adds to their research and directly benefits people in the group, sometimes without them even realising. Through these exchanges they can get to know different ways of handling things, people generally do not question something that has been done the same way for many years until someone else comes along who does it another way. When asked about the large amount of international scientific collaboration which takes place within his research group, Prof. Dr. Schönherr smiles and says: “It’s colourful here, we enjoy it very much.”