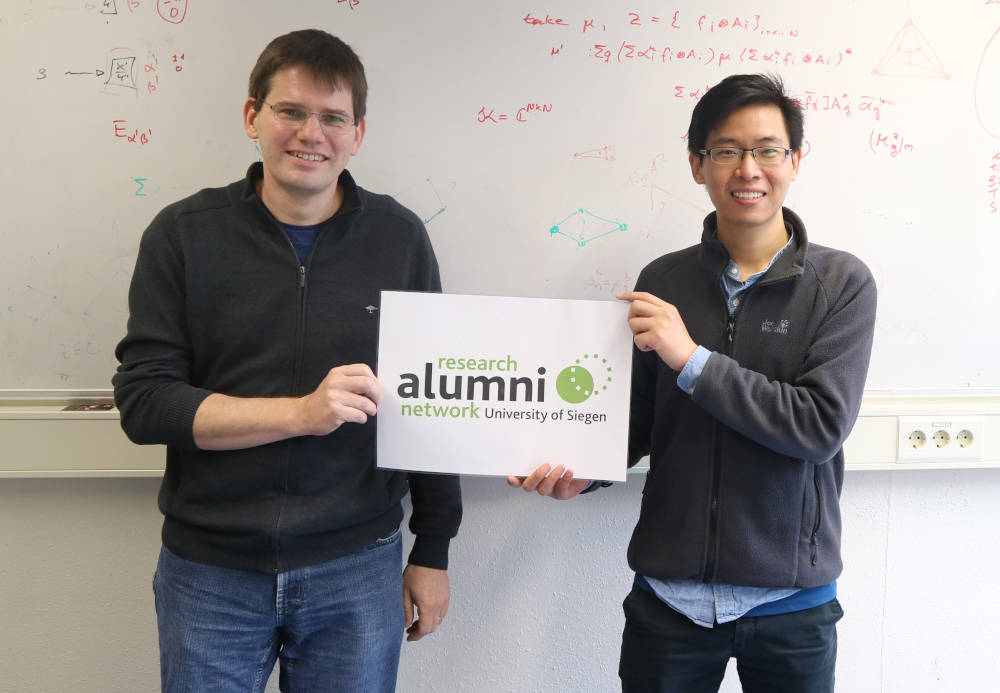 Understanding the context of contextuality

Zhen-Peng was first introduced to Otfried by his doctoral supervisor, who has been a close friend of Otfried for many years. It was during a conference in the Swiss city of Zurich that they both had the chance to discuss the opportunity for Zhen-Peng to join Otfried’s working group in Siegen for what was originally planned to be a one year visit. After being awarded with the prestigious Alexander von Humboldt scholarship six months into his stay in Siegen he was able to extend his visit to two more years.

His reason for coming to Siegen was to expand his research horizons, and share his ideas with other researchers in his field. There are relatively few research groups specialised in this area of quantum physics, so being able to discuss developments with others in the same field was particularly valuable.

Zhen-Peng first research focus was in an area of quantum physics known as contextuality. On the quantum level, characteristics of certain quantum elements cannot be measured definitively, as each measurement method produces a different result. This is due to the fact that measuring a property will in-fact change that property slightly, and may indeed influence the result of another measurement that is subsequently made. Each measureable property is therefore expressed as a range of probable values derived from each measurement method rather than as a definitive number or expression. Much of this work is theoretically calculated, and then in cooperation with the experimental working groups the derived values are checked with real world data. Zhen-Peng has mostly finished his research on contextuality, and will now move into other related fields such as Quantum Networks, which are important for the development of quantum computing.

The previous months have of course not been ideal for research, even for fields which make less use of lab equipment, it is crucial for researchers to be able to meet and to discuss their findings as well as other developments in their field, and while this can be replicated online, it can make doing so much more difficult. Otfried’s department continues to expand its work despite the challenging conditions, Junior Professor Stefan Nimmrichter is helping to expand the groups experimental capabilities, and the group has also taken on several more researchers. In future they will try to establish a master programme in quantum science at the university.

Although the city of Siegen is not especially large, the university punches above its weight in many areas of research. The university’s smaller size makes it easier to get things done without too much paperwork, indeed it is possible for someone to know most of the people engaged in research here on a first name basis.

The success of the quantum physics research groups here are in part due to their decision to strongly specialise in particular areas. By bringing together researchers specialised in a particular field, it gives them the opportunity to discuss their findings with others who understand how to interpret them. Given that there are not so many research groups specialized in these particular areas of quantum physics, this enables the research groups to attract researchers from all across the world, brought together despite their different cultures and backgrounds through a shared passion for their research.

Once Zhen-Peng’s research visit is complete, he will return to China in order to be closer to his family, but he and Otfried’s research cooperation will likely continue long into the future.

This article is based on an interview with Dr. Zhen-Peng Xu and Prof. Otfried Gühne and was written by Benjamin Wrigley.