In studio:A, the Career Talk with Alumni, international alumni shared their experiences and perspectives starting their careers in Germany with international students.

Finding a job after your studies can often seem daunting, particularly for the 12% of University of Siegen students who are from outside Germany. These students may face problems in navigating lengthy and confusing application processes, and with perfecting their German Language skills. Three Siegen Alumni who successfully overcame these obstacles were guests at the Studio:A panel discussion on 22.01.2020. These guests were Frederic Arsene Youbi Si Nziko and Dr.-Ing. Romeo Ayemele Djeujo, who are both from Cameroon, and Kapil Bhardwaj, who is from India. After finishing their master’s degrees, they were faced with the question of what to do next. They decided to stay in Germany to begin their careers, and are now employed in interesting companies across Germany. During the discussion they were able to share their experiences of working, studying, and applying for positions in Germany, and to answer questions and offer advice to students who hope to do the same. The discussion was moderated by Benjamin Wrigley, who is originally from England, and wishes to begin his own career in Germany once he has finished his master’s degree in Economic Policy. The event was jointly organised by the University of Siegen’s Alumni Association and the SieguVer project of the University’s International Office, which supports international students in entering the regional job market. 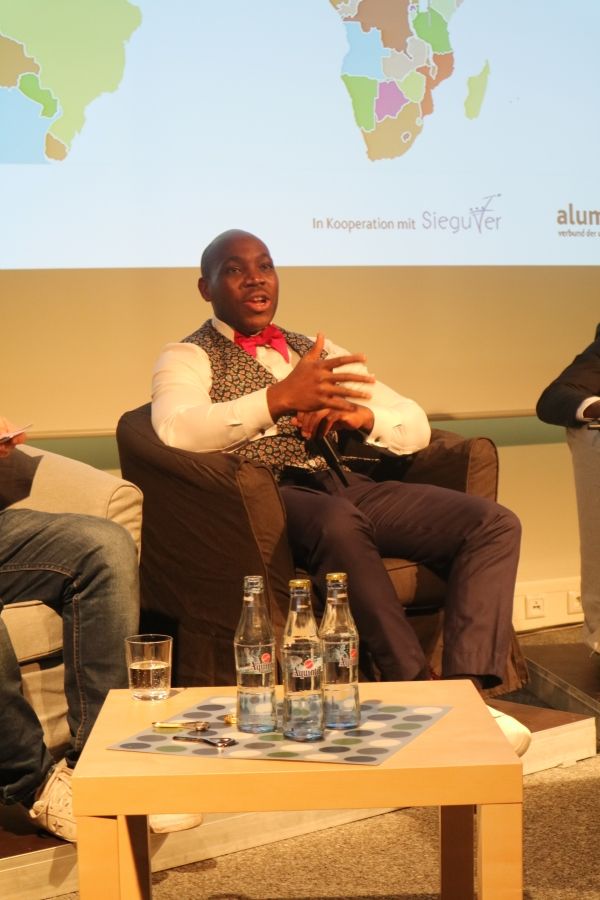 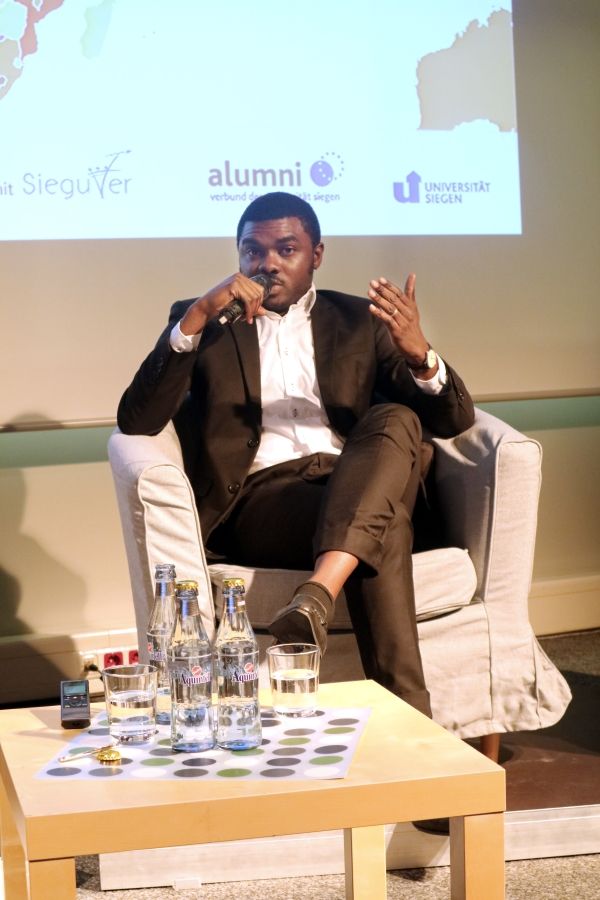 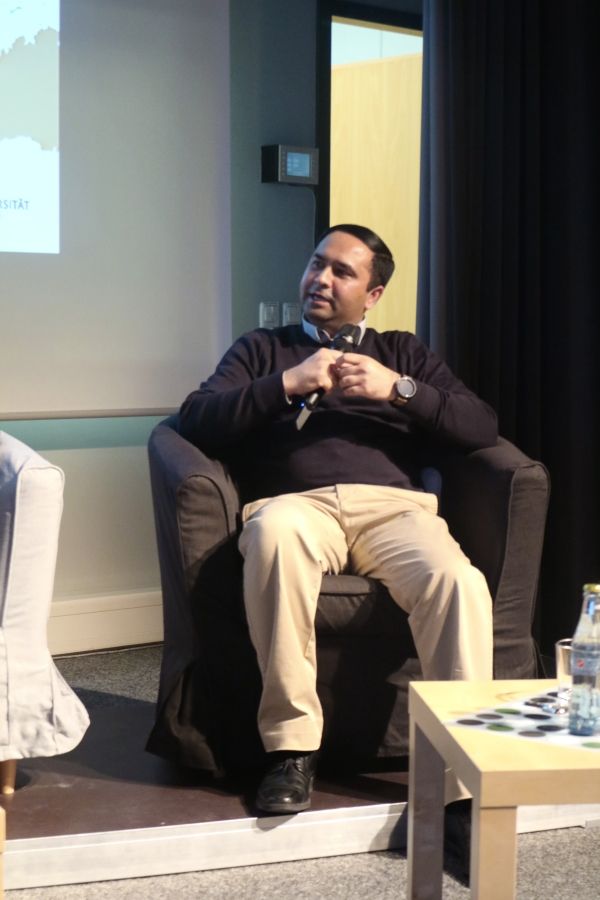 Although each guest did their master’s degree in Siegen, they all vary with respect to their field of study and current job. Frederic Arsene Youbi Si Nziko is Sales Manager for Western Europe and the U.K at Commerzbank in Frankfurt. He studied Controlling und Risk Management in Siegen. Kapil Bhardwaj did his master’s degree in Mechatronics at the University and until recently worked as Project Management Consultant for MI-GSO in Augsburg. He is now an IT consultant for Lufthansa. After having done his Master’s in electrical engineering in Siegen, Dr. Romeo Ayemele Djeujo did his doctorate here at the Chair for Data Communications Systems). He is currently a Global Lead for Enterprise Cloud and IoT security at the Carl Zeiss Group in Oberkochen, Baden-Württemberg. Despite these differences, each panellist faced similar challenges to starting their career here in Germany and have similar advice for today’s foreign students wishing to be successful during the application process.

For those international students unsure about how to take those first steps into their career, it was particularly interesting to hear about how the three guests came to be in their current positions. Although their stories were all different, they all had similar advice for the students wanting to know how to proceed. One important takeaway was that having applications rejected is simply a normal part of the application process. Youbi told those in attendance that a rejection from a company should not be taken personally and that it does not mean that you are not worthy of filling a particular position, rather it is simply that the company does not see you as a good fit for them at that particular point in time. If you work on your application and try again then things may be different.

Another point was the importance of having a well written CV and cover letter, and to continually improve them based upon feedback. For example, Romeo’s first application to Daimler was rejected, but sometime later another application was accepted in part due to his cover letter and CV, which he continually improved throughout the application process. Kapil reminded the audience that a CV is your first point of contact with a potential employer, so applicants must put their heart and soul into it, while still considering exactly what the company is looking for in a potential employee.

Youbi’s path into his job was less conventional, and shows the importance of making personal contacts at companies. After he completed his internship at Commerzbank in Frankfurt, there were unfortunately no permanent positions available for him. So he instead found a job at another bank in Munich, which he didn’t enjoy as much. One time while visiting a friend at the Commerzbank in Frankfurt, he spontaneously popped into his former boss’s office to ask if they had any positions available. Two months later he received a contract for a position at Commerzbank by post.

All three agreed that although the application process can be gruelling, particularly when receiving rejections, it’s important to keep your goals in mind, and that receiving a position in a company which is interesting and fulfilling makes it all worth it.

What are employers looking for?

One question that was on everyone’s minds was what was most important for companies when considering who to hire: Good grades? Practical experience from internships, or other activities? Or something else? Youbi answered by saying that it depends on the company and its hiring practices, some use algorithms to reject people without sufficiently high grades, whereas others will consider what other kinds of activities the applicant has done. Romeo answered that grades are only important to clear the initial hurdles of the application process, once someone has gotten through to the interview, what counts more is their personality and how they come across. They all agreed that internships, external university activities are a good way to stand out in a crowded field of applicants. And if a student is working or engaged in projects besides the University, then taking a bit more time than the recommended study time is not a problem for employers.

Many students in attendance also wanted to know about employers expectations from new employees, are they expected to know everything from day one? Kapil reassured them that this was not the case, companies know that those skills used in the workplace can differ from studies, and they take the time to train the employees so that they can fit into their workplace. Romeo however stated that this wasn’t necessarily the case for those with doctoral degrees. 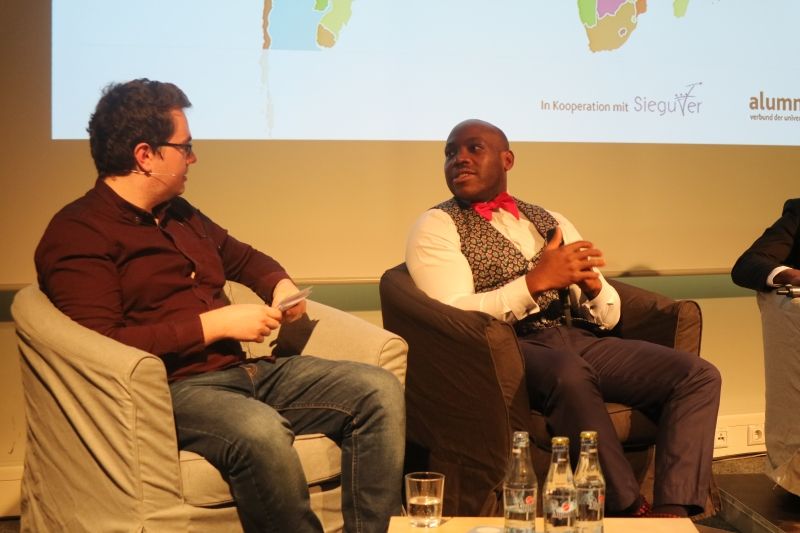 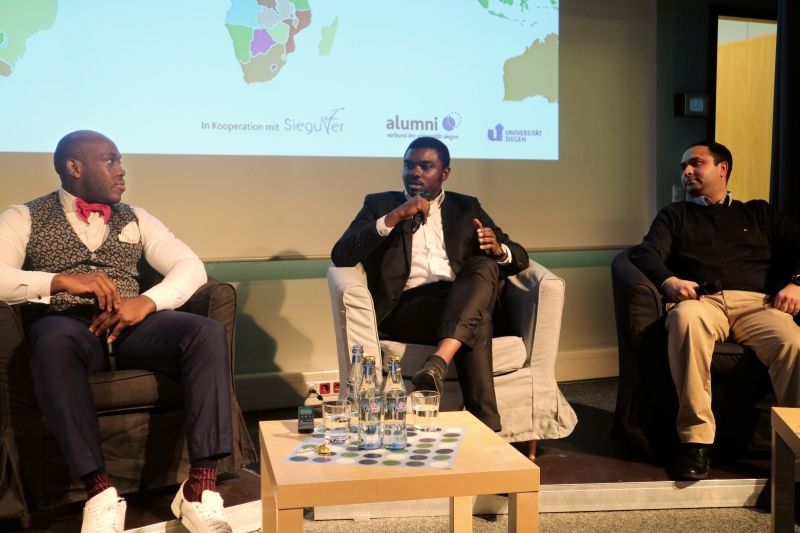 The joys of the German language; der, die or das?

The German language isn’t known for being a particularly easy language, particularly for those working in places with strong regional dialects, such as Bavaria. For many students in the audience, many of whom studied in English and weren’t fluent German speakers, this represents a big challenge to finding work. Another question raised by Ben was the ratio of German to English in the workplaces of the three panellists. For their employers, English was the main working language, this however does not mean that it isn’t necessary to learn some German, much is missed during coffee breaks and socially when someone cannot converse in German with German colleagues. It would be possible for all three to work without knowledge of German, however it would make day to day life very difficult. Many people in Germany do not speak English, so having some German knowledge is essential in many situations, such as when you are going to the doctor, or dealing with government bureaucracy. Kapil also made the point that speaking to people in German allows you to get to know them and build social networks faster.

It’s important not to be frightened to speak German because of some of the more challenging grammatical rules, such as a noun’s gender. Saying “die Tisch” instead of the grammatically correct “der Tisch” is usually not an issue so long as you can be understood by your German colleagues. In those cases where having an email or report written in grammatically correct German is vitally important, they are able to ask their German colleagues for help, and they return the favour when it comes to having things written in English or other languages. For each panellist it was clear that to live in Germany, one must speak the language, but it doesn’t have to be perfect. Youbi recommended everyone in the audience to use the opportunity to learn German while they are still at University, as German classes there are much cheaper than elsewhere, and as a student one has more time to study the language.

Although Germany wasn’t initially their first choice when it came to choosing a place to study, all three panellists came to love Germany, and they are glad to have had the opportunity to study and work here. From Romeo and Kapil’s perspective, Germany offers many exciting opportunities for those with an engineering background. For Youbi, whose studies focused on business and finance, it depends on the company. Those that operate internationally always need the expertise in language and culture which international employees provide. When it comes to the future, all three guests have big plans: Youbi would like to work for a German company - perhaps even abroad, and Romeo would like to continue his personal development by moving to a position with more responsibilities. Kapil would like to try something completely different. Now that he works for Lufthansa, his dream is to one day become a pilot.